When Gray Days Signal a Problem

Dysthymia, a Mild Form of Depression, Can Last For Years and Often Goes Undiagnosed, Untreated

Barbara Bowman thought the lethargy she has felt since early childhood was due to laziness. As a teacher, wife and mother in Virginia, she would often become argumentative, and then have attacks of remorse. Marriage counseling led her to individual therapy that finally diagnosed dysthymia—mild, chronic depression that can sometimes last for decades.

People who are chronically a little depressed -- gloomy, grumpy, low energy -- have "dysthymic disorder," a condition with its own risks of job and family problems, as well as episodes of major depression. Melinda Beck has details.

Persistent feelings of hopelessness, irritability, low self-esteem and low energy are among the signs of dysthymia (dis-THY-mia). Officially, it's when someone has a dark mood on most days for at least two years. Eeyore, the downcast donkey of "Winnie the Pooh" is the poster child.

"Oftentimes, people have been that way since childhood and it just feels like who they are," says Daniel Klein, chairman of psychology at New York's Stony Brook University.

Yet there's growing evidence that even mild depression that is unrelenting can have severe consequences on work, family and social life, as well as high risk for suicide. 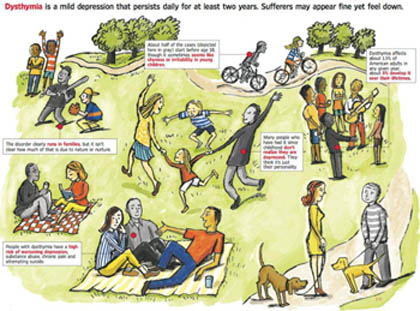 Researchers at the New York State Psychiatric Institute at Columbia University recently analyzed government surveys of 43,000 Americans and found that those who fit the criteria for dysthymia were more likely to have physical and emotional problems and more likely to be on Medicaid or Social Security disability than those with acute depression. They were also less likely to work full time, according to the study in the Journal of Affective Disorders in December.

Major depression shares some of the same symptoms, but it is three times as common and is more severe. It also tends to come in acute episodes, sometimes requiring hospitalization. Many people with dysthymia don't even realize they are depressed and never mention their feelings to a doctor.

Other studies have found that nearly 80% of people with dysthymia also have episodes of major depression—sometimes known as "double depression." People with chronic depression are more likely to attempt suicide than those with more acute forms, in part because their emotions have been rubbed so raw for so long.

Rufus Williams says he knew from about age 5 that he was sadder than other people and even tried to impale himself on a bed post to end his life. He was diagnosed with dysthymia in his 20s and has been in and out of treatment ever since. Even when he is feeling better, "I can feel the sadness right below the surface, like something waiting for you in the next room," says the 42-year-old telecommunications technician in Somerset, N.J. "It's made me a hard person to deal with in a relationship. I'm no picnic," he says.

Officially, dysthymia affects only about 1.5% of the U.S. population in any given year and 5% at some point during their lives. But the current definition excludes anyone who had an episode of major depression during the first two years.

Because symptoms often wax and wane over the years, some experts have recommended combining dysthymia, double depression and chronic major depression into a single category of chronic depression in the next edition of the American Psychiatric Association's Diagnostic and Statistical Manual (DSM 5).

Discussions are still ongoing, but Jan Alan Fawcett, a University of New Mexico psychiatrist who heads the Mood Disorders Work Group for DSM 5, says there is a growing consensus that how long depression lasts may be more important than the number of symptoms a patient has at any given time. "Once it's chronic, it should be viewed as just as severe as any depression," he says.

As with other forms of depression, there's no blood test or brain scan for dysthymia. The diagnosis is based on symptoms and history.

In about half of cases, the gloomy moods, chronic pessimism and low self-esteem begin before age 18, but the disorder can look like shyness or irritability in young children. It frequently runs in families, but it's unclear how much of that is due to nature or nurture.

Children who suffer abuse or trauma also have high rates of disorder. Whatever the cause, they often have trouble in school and in social relationships and are less likely to get married than their peers.

Dysthymia that starts later in life is often triggered by a major life stress, such as the loss of a job, the death of a loved one or the breakup of a marriage. Even then, people who have it may not recognize the lingering bad feelings as depression. It can also masquerade as chronic pain or other physical symptoms, further complicating diagnosis.

Like other mood disorders, dysthymia is diagnosed about twice as often in women as in men, but men may simply be more stoic, less willing to seek help or attempt to self-medicate.

"Men may belly up to the bar instead," Dr. Fawcett says.

Alternatively, some people with dysthymia are extremely high achievers and make an effort to be upbeat, but it may be hard to sustain. "There are people who are very good at masking it and mental-health professionals often don't take them as seriously as they should because they seem to be functioning so well," Dr. Klein says.

Often, people with dysthymia only discover they have it when they get much worse, and finally seek treatment and realize they've felt gloomy all their lives.

Dan Fields, a 46-year-old medical editor in Framingham, Mass., says he suspected he was depressed in high school but finally sought help when his anger at minor irritations and hypersensitivity to criticism threatened his marriage. "I got to the point where I had to get help," he says. A combination of individual and family therapy and antidepressants have helped "take the edge off things," and his threshold for annoyances is a lot higher. "I can still feel down or furious at times, but I'm less likely to get stuck in these moods," he says.

Dysthymia has not been studied as extensively as major depression, but treatments are generally the same. About one-third of people with chronic depression respond briskly to antidepressants, says James H. Kocsis, a professor of psychiatry at Weill Cornell Medical College in New York City.

"I can tell when I start receiving wedding announcements from patients. They start dating and socializing," he says. "Often their work improves dramatically, too. They're able to assert themselves. They ask for raises and promotions and stop taking mental-health days off."

Other patients need to try several medications, or combinations of them, to find relief. Talk therapy can also be helpful for chronic depression. To date, the best evidence is for cognitive behavioral therapy, in which patients learn to challenge negative thought patterns that bring them down.

Ms. Bowman, now 61, says cognitive behavioral therapy helped her identify feelings that caused her trouble. "But I needed medication, too," she says. "It helps you reach a place where you can help yourself."

A pilot study presented at the APA meeting this spring showed that Behavioral Activation Therapy, which stresses making positive changes to reach goals, can help those who respond to medication but still aren't functioning well. "In short, you're not depressed, but you still haven't gotten up off the couch and found a job," says David Hellerstein, a professor of clinical psychiatry at Columbia University School of Medicine, the lead investigator.

Experts stress that treatment for chronic depression generally takes longer than more acute forms. Relapse rates are high, and many people find they need to stay on medication long term. "You have to go with the expectation that this is not likely to go away in four to six weeks," Dr. Klein says.

And about one-quarter of people with dysthymia never do find much relief. Says Mr. Williams, "My main goal is to be able to handle the adversity that life throws at me in a healthy manner."

Write to Melinda Beck at This email address is being protected from spambots. You need JavaScript enabled to view it.