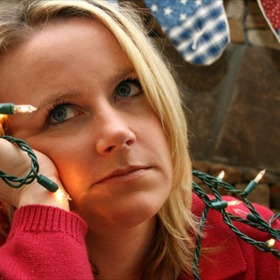 
Watertown— Year round, an average of one out of ten adults are reported to suffer from depression. This is approximately 9.5 percent of the population, 28,500,000 people in the United States are clinically depressed for a large portion of the year. +

Studies show that depression is the number one disability in women today and it is estimated that by the year 2020, depression will be the second highest disability for both men and women. However, a smaller portion of the population tend to suffer from the “holiday blues.” Doctor Knaus states in his article, “Beating the Holiday Blues and Depression” that depression around the holidays tends to coincide with pressure and expectations. Doctor Knaus states that, rather than the holiday’s bringing joy; it can often rob people of it:
“Holiday pressures can be the thief of joy and satisfaction. Practically everyone will add to their debt. There is often unexpected inconvenience, merging with crowds of aggressive shoppers, waiting in line for a desired child’s toy, or feeling frustrated that the instructions for assembling a toy seem written in an unfamiliar language. Rushing, too many responsibilities, and hassles can come like furies around holiday times.”

ABC50 spoke with Clinical Director and Marriage and Family therapist at Family Counseling Services, Randy Imhoff MFT. Mr. Imhoff stated that depression stems often from anxiety and stress building up: “The body’s response to having that high anxiety and stress is just to go the opposite direction and go into depression, at some point in time trying to counter what is going on.”
Mr. Imhoff continued to point out the necessity to analyze the biological components of what is taking place in the body: “All the chemicals that get pumped into our system when we are anxious and really stressed, the body wants to counter that and does with other chemicals and hormones. When this happens we end up maybe going down into depression or a ‘funk’, if you will.”

Through out the Holidays, the pressure can mount to spend money that you do not have. Incurring debt via credit cards or dipping into your savings can create added stress. Mr. Imhoff told ABC50 that he was stunned at all of the holiday ads, “It is as though, they are in your face tempting you to buy and spend money outside of your means.” Imhoff said, the best way to avoid overspending is to pre-plan in advance. He pointed out that many people do not plan in advance as they should, putting a little money aside for their shopping budget. Then once Christmas and New Years celebrations come to an end, overspent families struggle to figure out how to pay for food, rent, and a large credit card debt.

However, this is isn’t the only cause for stress, family feuds around holiday gatherings are not uncommon especially with extended family situations. There are ways to reduce stress, according to health news article, “Avoid Holiday Family Feuds” mentions seven key points in avoiding family squabbles:
“ 1. Stay at a Hotel- even though it’s cheaper staying with relatives, staying at a hotel allows for more privacy and reduces the chances of arguments.
2. Hosting, Don’t Over Do- Don’t over spend just to impress guests
3. Devise a clever seating arrangement- Don’t seat feuding relatives together, ensuring your seating arrangement is “disaster-proof.”
4. Go Public- Instead of making a large dinner at home, perhaps going out to dinner will be less stressful and reduce chances of arguments. As, most people tend to behave themselves in public settings.
5. Don’t Discipline Your Relatives’ Kids- Regardless if a child is acting horribly, it is imperative to not parent a relatives’ child. This will only blow up into an argument.
6. Coach Your Better Half- Remind your spouse of any family triggers to avoid.
7. Laughter is the Best Medicine- Often times having a lighthearted approach can change the atmosphere. ”

A Harvard Medical Study echoed what Mr. Imhoff stated, that aside from a chemical imbalance, there are numerous other triggers that instigate depression. One being chronic stress, so reducing stress around the holidays can help you potentially avoid triggering depression. Having a budget is important to avoid overspending and getting into debt. Having too high of an expectation for Thanksgiving, Christmas, and New years to go perfectly, can be a recipe for a let down. Crushed expectations can lead to depression.

Imhoff mentioned that often times the best approach is often more simple than people think: ”Keep things as simple as you can, don’t try to plan too much, don’t try to do too much. Because there are a lot of expectations around the holidays, keeping things simple can help.”

Imhoff believes that reducing depression around the holidays relies on a few key factors: families need to keep a reasonable budget, not over spend, and not attempt to complicate the holidays. Keeping things simple and easy with reasonable expectations- can help folks manage their stress level. If stress is reduced, so are the chances of falling into depression, and keeping on a family budget will lessen the chances of falling into debt once the holidays are over.

Sometimes, quality time with loved ones is the best gift- it doesn’t cost anything other than your undivided attention and love. This holiday season quality time and simple holiday plans might seem a little modest, but perhaps the best formula for reducing depression and keeping the joy of the season alive.