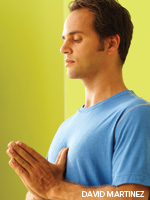 A couple of weeks ago, I taught a class at a yoga conference in Houston. The first person there was a young guy, probably in his mid-20s, who approached me sheepishly.

“I came straight from a microbrewery,” he said. ”I thought you might appreciate that.”

It was late afternoon on a Saturday, so who was I to judge?

In any case, we weren’t there to talk about microbrews. He’d been doing yoga several times a week for nine months, he said. It had really helped him deal with stress, and to sleep better.

“I’m also using it for depression,” he said.

He looked surprised, but it was true. Despite the cheery, trouble-free façade I present to the world, I suffer from depression. I have since I was a teenager.

For decades, “The Noonday Demon” would descend without warning, clouding my mind with misery. It didn’t matter what my personal, professional, or family circumstances were at the time. Blackness consumed my heart and despair ruled my days. I stayed in bed until dusk, unable to move, to speak, even to think, sobbing at random intervals and unable to see through the fog.

Sometimes the depression would take the form of anger, not sadness. I couldn’t control my emotions; I got into bar fights; I lost friends. And I probably blew any number of career opportunities. It’s hard to say. I was too depressed to properly evaluate.

I’d like to say, “then I discovered yoga and all was healed,” but that’s not exactly how it went. First, I went on an antidepressant called Wellbutrin. And it worked great. A month passed, and I didn’t cycle down at all. Then it was two months, and then six, and I rarely felt sad, not even remotely. There were drawbacks. It felt like my heart was going to explode out of my chest all the time. I was hornier than a high-school sophomore. There were crazy bursts of energy followed by periods of complete exhaustion. My blood pressure shot up 20 percent.

After about three years, the pills stopped working so well. I upped the dosage, which only made the side effects worse. Soon enough, a little blackness began to bother my mind. One day, I quit the drug entirely. It was a risk, but I was fine. By then, I’d already started practicing yoga.

There’s a Sanskrit word I learned in Ashtanga school: Samskara. Perhaps you’ve heard it, too. It translates, literally, as “seed,” but in the Yoga Sutras, Patanjali refers to it, more obliquely, as “negative sense impressions that cause suffering.” Everyone gathers their share of samskara in their lives; we all come to the mat with something we need to sweat away. But those of us who suffer from depression start with a little extra samskara. We suffer from the onset, whether anything in our life has caused that suffering or not. When we’re asked to participate in normal life, it’s unfair, like trying to play golf without your handicap. Yoga evens the score. It balances out the mental injustice.

When you practice yoga, it changes your brain chemistry. I haven’t done any research, or read most of the countless studies that prove this. I can only speak from direct experience. I’m not depressed anymore, at least not in any way that matters. Sure, I have down days and still experience disappointment. But the formless, causeless misery that only a true depressive can understand is gone, completely. Yoga practice did this for me. What else could it have been?

Occasionally, I feel a little random sadness creeping in along the edges. When that happens, I get to the mat as soon as I can. When I do, I’ll acknowledge the depression and not try to push it away. Fighting it can be worse than just acknowledging the battle. Those generally aren’t very fun hours, but when they’re over, I feel such sweet relief.

So yeah, kid, I can definitely relate. Let my heartwarming story be your guide. Just keep practicing, and you’ll get better.