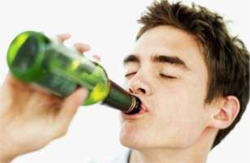 Two questions asked during a regular pediatrician's visit could help identify youth with drinking problems, according to a national expert group convened by the National Institute on Alcoholism and Alcohol Abuse (NIAAA), which just released guidelines for alcohol screening and treatment.

Despite the national drinking age of 21, about 7% of American 12-year-olds have had more than the odd sip of an alcoholic beverage. By age 18, that proportion rises to 70%. Children who start drinking before age 15 — outside of culturally appropriate settings like religious ceremonies or family meals in wine-drinking cultures — are four times more likely to develop alcoholism than those who start later.

While early deviant drinking doesn't necessarily lead to alcoholism, it indicates that the young person may be at high risk for alcohol problems and other psychiatric disorders, and may benefit from early treatment.

The questions pediatricians should ask according to the NIAAA are these, with wording varied to be age-appropriate:

Do you have any friends who drank beer, wine or any drink containing alcohol in the past year?

How about you — in the past year, on how many days have you had more than a few sips of beer, wine or any drink containing alcohol?

Screening is obviously best done when parents are not present and after the child has been informed about the doctor's confidentiality policy. Typically, pediatricians keep the information confidential unless the child is at immediate risk for alcohol-related harm by engaging in activities like daily drinking or drinking and driving.

The question about friends' drinking tends to predict future alcohol use. If the child answers yes to it but no to the second one, the doctor may commend the child for avoiding alcohol, discuss risks of drinking and ways they can avoid drinking if their friends continue to do so.

If the child admits to drinking, the NIAAA's guide offers doctors information about the level of risk associated with various amounts of drinking at specific ages, as well as guidance on performing what's known as a "brief motivational intervention" to help the person quit or at least cut back to less risky levels of drinking.

Brief interventions involve "meeting people where they're at," rather than demanding immediate abstinence or entry into intensive treatment. During a brief intervention — which literally takes 15 minutes or less — the doctor discusses reducing or eliminating risky behavior and ways this might be achieved.

Importantly, however, the focus is on the patient's goals and desires. The doctor tries to help patients find their own reasons for choosing healthier behavior and then support them, rather than demanding change or "confronting denial." Follow-up appointments are made to discuss progress, sometimes combined with other medical follow-up appointments if the child does not want to disclose a low-level problem to parents.

Surprisingly, given how short these interventions are, they have been shown to be as effective as more intensive treatment for reducing teen alcohol use. They carry little expense and none of the risk of exposing teens to more deviant peers that can come with group treatment for substance use problems.

If teens are found to have ongoing problems or are engaging in potentially life-threatening behavior like drinking and driving, the NIAAA guide offers parents and doctors referral advice to find the best care, including more intensive treatment.

MORE: How to Find the Best Drug Treatment for Teens: A Guide for Parents

"We know that alcohol is by far the drug of choice among youth," said NIAAA acting director Kenneth Warren in a statement. "Underage drinking is also a marker for other unhealthy behaviors and it often goes undetected. This new tool was designed to allow busy practitioners who manage the health and well-being of children and adolescents to conduct fast, effective alcohol screens and brief interventions."

Unfortunately, actually getting doctors to incorporate screening into their practice may prove difficult, given demands on their time. An NIAAA study of 4,000 adult patients found that while 49% were asked about their drinking, only 14% of those whose alcohol use exceeded healthy levels were counseled about it by their doctors in their most recent visit.

The NIAAA alcohol screening and intervention guide for youth can be found here.

MORE: Does Teen Drug Rehab Cure Addiction or Create It?

Maia Szalavitz is a health writer at TIME.com. Find her on Twitter at @maiasz. You can also continue the discussion on TIME Healthland's Facebook page and on Twitter at @TIMEHealthland.