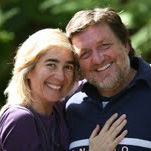 Jay and Michelle, work alongside SADAG running three bipolar support groups in Cape Town. The first group is in the south of Cape Town in Claremont. The meeting is held on the third Tuesday of every month at the Crescent Clinic. The second group is in the north of Cape Town, in N1 city, held at the Claro Clinic, the first Tuesday of every month. Their third group is an online support group, to sign up visit (bipolarsa.ning.com). They have some of the longest running support groups, already operating for 14 years. This couple began their groups after Jay was diagnosed with bipolar disorder. Several years ago they crossed paths with SADAG and ever since have supported SADAG and they have worked closely together. They have helped out with workshops and press.

Their two support groups run once a month each with 20-30 people attending. Jay started up a website (www.bipolar.co.za) two years ago, now it has 750 members. "Running the groups has had a huge impact on our lives, I hope our work has had an impact on others lives," Says Michelle. " Helping others gives me great joy."

Jay and Michelle welcome people in need into their home. Michelle says, “ Jay and I have found it works for us to take in women. We have two ladies in there 30’s that come and stay with us when they going through a rough time and need TLC. They need to be uplifted and given guidance, and support. Staying with us puts a smile on their face and cheers them up!”

Their suicide situations with patients have been the most memorable for them says
Michelle. "Helping someone out in that situation is very rewarding. When a person is in real trouble you drop whatever you're doing and go to help them." Michelle adds, "I'm a lecturer and I was once called out of class because a girl was going to kill herself."

And for the future Jay says, "I can't imagine us not running the group. It has become part of our lives and brings us ongoing joy." What Jay would like to do is expand their boundaries and reach out to the black communities in Cape Town. "There is so much help needed in the black communities because they do not always recognise mental illness. There is such limited help for those that have mental illnesses." We will help anyone who wants to start groups in townships near Cape Town.

The problem that Jay and Michelle will face is finding a successor to carry on their group, as they get older. They urge people in their community to become part of this cause and help others. "When you help people, it makes you feel good! It's been my therapy and its very gratifying," says Jay