10 Movies to Uplift You from Depression 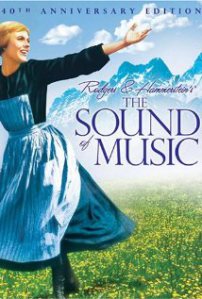 10 Movies to Uplift You from Depression

Among my strongest tools to combat depression is distraction. And one of the best distractions is watching a movie.

Watching the right movie has an antidepressant effect, as it relieves the brain of the obsessive, ruminating, self-defeating loop for two consecutive hours. The brain can readjust a little during those 120 minutes and is a bit kinder when the film is over.

The list of uplifting movies is as long and comprehensive as the negative thoughts going through a depressive’s head, but here is a list of my 10 picks.

It’s not your standard inspirational flick, but it has me laughing out loud every time I watch it, and laughter is one of the very best things you can do for a depressed brain. This movie’s one-liners are so stupid that they are funny. Even the 31st time. Surely it will make you feel better, and don’t call me Shirley.

2. The Sound of Music

I know the lines by heart now, but I get goose bumps every time I watch this flick. The music combined with the theme of hope and love uplifts and inspires me.

Businessman George Bailey (James Stewart) reminds us that we have touched far more people in our lives than we think, that there are angels that surround us, and that there is hope even for the most desperate.

This film will resonate with anyone struggling to find a sense of identity. Will Hunting, a janitor at MIT, is brilliant but misguided. A savvy psychologist (Robin Williams) helps him to find direction in his life.

I confess that I listen to the Rocky soundtrack when I think I can’t do it anymore … I can’t keep putting one leg in front of the other. Seeing Sylvester Stallone persevere through sheer torture with an impressive single-mindedness inspires me to go forward in my quest for sanity despite the many demons in my head that say I should surrender.

I empathized and identified with the autistic savant brother Raymond Babbitt (Dustin Hoffman) as soon as I met him. He counts straws, is petrified of running water, and has so many peculiarities that a road-trip across the country proves nearly impossible. But his heart is good and pure and because of that he will be okay.

If you consider mental illness to be a scary land in which feel you feel alienated from just about everything, you will relate to E.T. and his quest to go home. A story about friendship, rebirth, and hope, this movie is full of inspirational one-liners: “Be good.” “I’ll be right here.”

When Iowa corn farmer Ray Kinsella (Kevin Costner) hears a voice that says, “If you build it, he will come,” he interprets that to mean if he constructs a baseball field on his farm, the Chicago Black Sox will come. He does and they do. A movie that underscores the power of belief in your convictions, I come away inspired that if I believe I will be well, I will, in fact, be well.

It’s hard not to fall in love with Forrest Gump (Tom Hanks). Despite his low IQ, he seems to have succeeded at everything he has stumbled onto in his life, except for winning over his childhood sweetheart, Jenny. The movie is chock full of great one-liners ( “Mama always said life is like a box of chocolates”) and lessons, like anyone can love anyone.

This film is a tad cheesy, but I love it for two reasons: It was filmed when I was at Saint Mary’s College in Indiana, right across the street from Notre Dame. I also appreciate its message of perseverance, courage, and conviction to overcome all odds.