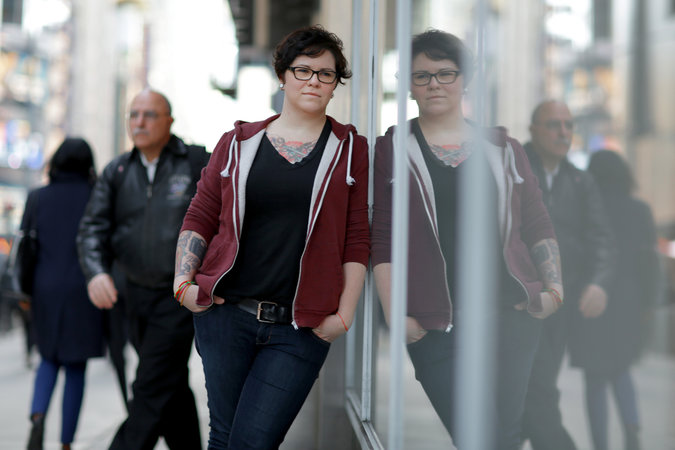 Dese’Rae L. Stage, a photographer and writer living in Brooklyn, tried to kill herself in 2006. She has since created an online photo exhibit of people who have also survived suicide attempts and is among the dozens whose stories are becoming known on Internet forums and through social media. Credit Michael Appleton for The New York Times

The relationship had become intolerably abusive, and after a stinging phone call one night, it seemed there was only one way to end the pain. Enough wine and pills should do the job — and would have, except that paramedics barged through the door, alerted by her lover.

“I very rarely tell the story in detail publicly, it’s so triggering and sensational,” said Dese’Rae L. Stage, 30, a photographer and writer living in Brooklyn who tried to kill herself in 2006. “I talk about what led up to it, how helpless I felt — and what came after.”

The nation’s oldest suicide prevention organization, the American Association of Suicidology, decided in a vote by its board last week to recognize a vast but historically invisible portion of its membership: people, like Ms. Stage, who tried to kill themselves but survived. About a million American adults a year make a failed attempt at suicide, surveys suggest, far outnumbering the 38,000 who succeed, and in the past few years, scores of them have come together on social media and in other forums to demand a bigger voice in prevention efforts.

Plans for speakers bureaus of survivors willing to tell their stories are well underway, as is research to measure the effect of such testimony on audiences. For decades, mental health organizations have featured speakers with schizophrenia, bipolar disorder and depression. But until now, suicide has been virtually taboo, because of not only shame and stigma, but also fears that talking about the act could give others ideas about how to do it.

“This is a real shift you’re seeing,” said Heidi Bryan, 56, of Neenah, Wis., who has been speaking for years about suicide attempts she made in the 1990s. “For people working in suicide prevention, they always told us not to talk about our own experience, like they were afraid to tip us over the edge or something. Honestly, we’re the ones who know what works and what doesn’t.”

At a time of increasing concern about suicide among military veterans and college students, experts hope survivors will be able to offer new insights. Suicide is such a relatively rare event, its victims forever silent, that doctors know very little about how to prevent it. No policy, drug or intervention has been shown to reliably reduce suicide risk, researchers say, except in very specific circumstances, like the hours after someone lands in jail. The strongest risk factor for suicide is a previous attempt. About 7 percent of people who have tried once and survived later die by their own hand, more than 30 times the rate for people who have not tried before.

“We as researchers haven’t yet tapped the potential of working with suicide attempt survivors,” said Matthew K. Nock, a professor of psychology at Harvard. “There’s the potential to learn from them not only more about the experience itself, but about treatments, and where there are gaps in our understanding.”

Some therapists caution that there could be downsides to speaking out. “The main concern, I think, for psychologists and psychiatrists who work with suicidal individuals, is their ability to regulate emotion” if their public disclosure does not go as expected, said J. Christopher Fowler, associate director of clinical research at the Menninger Clinic in Houston.
Dr. Fowler said he supported the idea of suicide attempt survivors speaking out, but worried that “being rejected for some reason by people who you thought would be accepting — that’s the kind of experience that could put some people at higher risk of harming themselves.”

People who have survived an attempt and gone public often say the treatment they got afterward — locked down in a hospital ward, with little chance to confide in a sympathetic caregiver — was dehumanizing. They describe encountering a taboo against talking about their experiences from doctors and therapists as well as family and friends. And they identify few, if any, support groups; most are run by and for relatives and friends of people who did commit suicide — and often harbor some anger at the selfishness of the act.

“You’re basically punished for talking about it, wherever you turn,” said Leah Harris, 38, of Arlington, Va., who works for the National Empowerment Center, an organization of recovered psychiatric patients, and has spoken about her own attempt at 16 with prescription medications. “Even in treatment settings, all the interventions are brought down on you if you even mention it. So you just learn to shut up.”

Ms. Harris and Ms. Stage, who has created a photo exhibit of survivors, posted at LiveThroughThis.org, are among dozens whose stories are becoming known in Internet forums and through social media. Others include Kevin Hines, who jumped off the Golden Gate Bridge in 2000 and survived; and Craig A. Miller, whose book, “This Is How It Feels,” describes his attempt to kill himself with prescription pills and his recovery.

“For some people, the experience is a core part of their identity, and for others, it’s an experience that happened and they’ve moved on — they’re an accountant, a triathlete, an artist, whatever it is,” said William Schmitz Jr., a psychologist in Baton Rouge, La., and president of the suicide association. “This is the best advertisement for getting treatment, showing that people get better and lead full, productive lives.”

It will be no simple thing to figure out what preventive efforts work. Suicide is not a diagnosis but an unpredictable act. Peer counseling programs have helped people living with schizophrenia or addiction, for example, but it is much harder to identify people at risk of suicide who might be helped by contact with survivors of suicide attempts.

One research project underway will test whether people talking publicly about their experience of surviving suicide can reduce an audience’s prejudices against others like them.
“What we’ve found, with most mental disorders, is that education by itself doesn’t affect stigma much — but contact does,” said Patrick Corrigan, a psychologist at the Illinois Institute of Technology who is working with the San Francisco-based Center for Dignity, Recovery and Stigma Elimination, which has set up a speakers bureau. “We expect to find the same thing here.”

Staff members at suicide hotlines often know from experience that they have comforted people, but they often have no way of knowing how their work affected callers — and generally refrain from talking about their own attempts, if any.

“We as a field need to hear these stories,” said John Draper, director of the National Suicide Prevention Lifeline, “and not just to study them but to ask how they found a way to cope and connect: What did family and friends and doctors do that helped, and what did not?”

A version of this article appears in print on April 14, 2014, on page A11 of the New York edition with the headline: Suicide Prevention Sheds a Longstanding Taboo: Talking About Attempts.