A window into Schizophrenia

Stories as a Window Into Schizophrenia

The Voices of Schizophrenia 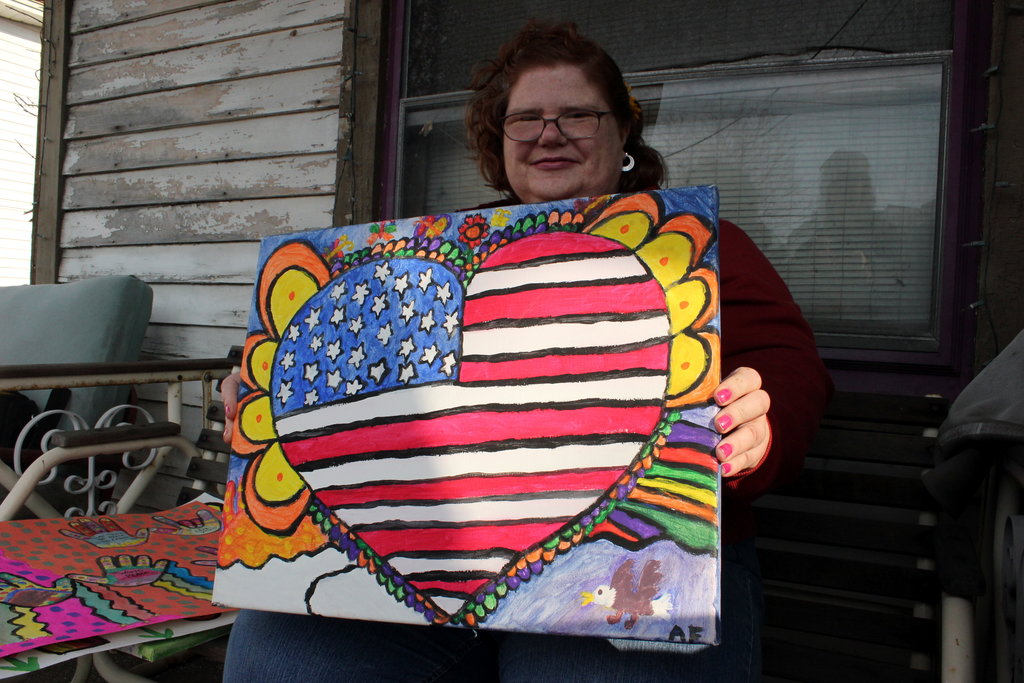 Alice Fischer, at home in Cincinnati, displaying one of her paintings. Ms. Fischer has schizoaffective disorder, a variant of schizophrenia. She was one of the first narrators to tell her story to the Schizophrenia Oral History Project

CINCINNATI — The psychologist Lynda Crane found that of the many injuries inflicted by schizophrenia, the greatest could be the pain of being forgotten. Just naming the illness somehow erased the person, something she learned when her 18-year-old son’s doctors said he had schizophrenia. Six years later, he committed suicide.

“It took me a long time to come to terms with it,” Dr. Crane says. “Even I had a hard time understanding it, how this bright man, with a brilliant future, could suffer like this. One thing I learned was that as soon as you mentioned the word, people stopped seeing the person. They just saw the diagnosis and a collection of symptoms. Doug, my son, was forgotten.”

For years Dr. Crane, a professor at the College of Mount St. Joseph in the western hills of Cincinnati, sought a way to enlighten her students and others about the ordinary people who live with schizophrenia despite its extraordinary burdens – the confused thinking, the delusions, the hallucinations, the anxiety and fear. Then she discovered a tool more commonly used among sociologists and anthropologists: oral history. Employing the device to examine schizophrenia has shifted her own perspective about a disease she thought she knew well.

“People with schizophrenia do not lose their individuality, even when the illness is very severe,” Dr. Crane says. “What I discovered through oral history is that it’s not about schizophrenia. It’s about a complexity of life that is very hard to get at any other way.”

For the past three years, on their own time and with no outside money, Dr. Crane and a fellow Mount St. Joseph psychologist, Tracy McDonough, have built the Schizophrenia Oral History Project.

Other oral history collections have focused on diseases like AIDS or leprosy, but this is the first to focus on schizophrenia, they say.

So far they have recruited two dozen people to sit down with them and a voice recorder, asking their “narrators” simply: What’s it like to be you?

“The real beauty of this project,” says Dr. McDonough, “comes out of the fact that Lynda and I really try not to ask a lot of questions. The narrators want to tell their stories. They have something to say. Many of them have told us that no one has ever asked them about their lives before.”

The psychologists began the project by alerting local mental-health organizations that they were looking for participants willing to volunteer directly. “We didn’t want the providers to make the call because that can create a sense of, ‘I have to do this because my therapist wants me to,’” Dr. Crane says. “So each of the narrators had to take the initiative.”

One participant, Shirley Austin, 47, lives by herself on the west side of Cincinnati with her terrier, Fluffy. After a nightmarish childhood of violence and sexual abuse, Ms. Austin learned as a teenager that she had schizophrenia, and she says that even though she takes her medication, has relatives nearby and attends a church, she wrestles with loneliness. When her therapist told her about the oral history project, she was curious.

“Not even my therapists have ever asked me about my life that much,” Ms. Austin says. “I felt like I got strength and courage talking about what happened to me. I want to tell all the teenaged girls to be strong, that I’m a survivor, and they can be, too.”

Dr. Crane and Dr. McDonough have delivered more than 30 talks about the project in the Cincinnati area, visiting schools and local groups and collecting responses.

“I like to think of myself as open-minded, but the Schizophrenia Oral History Project helped me see that I was stigmatizing patients,” said Vicki Cheng, a nursing student at Miami University who heard one of the talks. “I would not have been surprised to learn that a patient with cancer or heart disease loved organic gardening or painting. Why in the world should I be surprised that someone with schizophrenia has hobbies, too?”

The project has benefited participants, too, like Alice Fischer, 43, who has schizoaffective disorder, a variant of schizophrenia, and lives with her mother and brother in her childhood home in Cincinnati’s Price Hill neighborhood. Ms. Fischer said she had been teased since grade school well into adulthood. “Even right now, sometimes on the bus, people say mean things to me,” she said.
She jumped at the chance to join the oral history project as one of its first narrators because she says newspapers and television too often communicate the wrong idea about people with mental illness. Ms. Fischer also prodded her brother, who has schizophrenia, to participate in the oral history project, but he resisted, fearful of repercussions from going public with his illness.

The project’s website features Ms. Fischer’s vivid paintings of owls or hearts or handprints with upbeat messages for world peace. “I want people to know I’m not dangerous,” she says. “They don’t know what a nice person I am.”

One of the narrators most gravely affected by schizophrenia is Paul Drake, 49, who for 14 years has lived with a tabby cat named Tiger in a small cluttered apartment on Cincinnati’s west side. Through his reading, he learned organic gardening to supplement his meager food budget. He starts tomatoes and other vegetables on his windowsill and grows them on a small plot behind his building. He has taught his neighbors how to garden.

Dr. Crane and Dr. McDonough have shared with the narrators some of the written responses they’ve received from listeners to the oral history project; one comment for Mr. Drake said, “I respect Paul’s insights and appreciate his straightforward sharing of how he copes.”

Mr. Drake says the positive reactions “make me feel good.” Amid the disorder of his mind, he frames a sentence to describe the impact that his participation has had on him.
“It gives me,” he says, “some immortality.”

Dr. Crane is retiring from teaching this spring and turning over leadership of the Schizophrenia Oral History Project to Dr. McDonough, who has been applying for grants to support the work and searching for more narrators.

A few weeks ago, they got a call from Alice Fischer’s brother. He said he was ready now to tell his story.

Anne Saker is a writer in Maineville, Ohio.