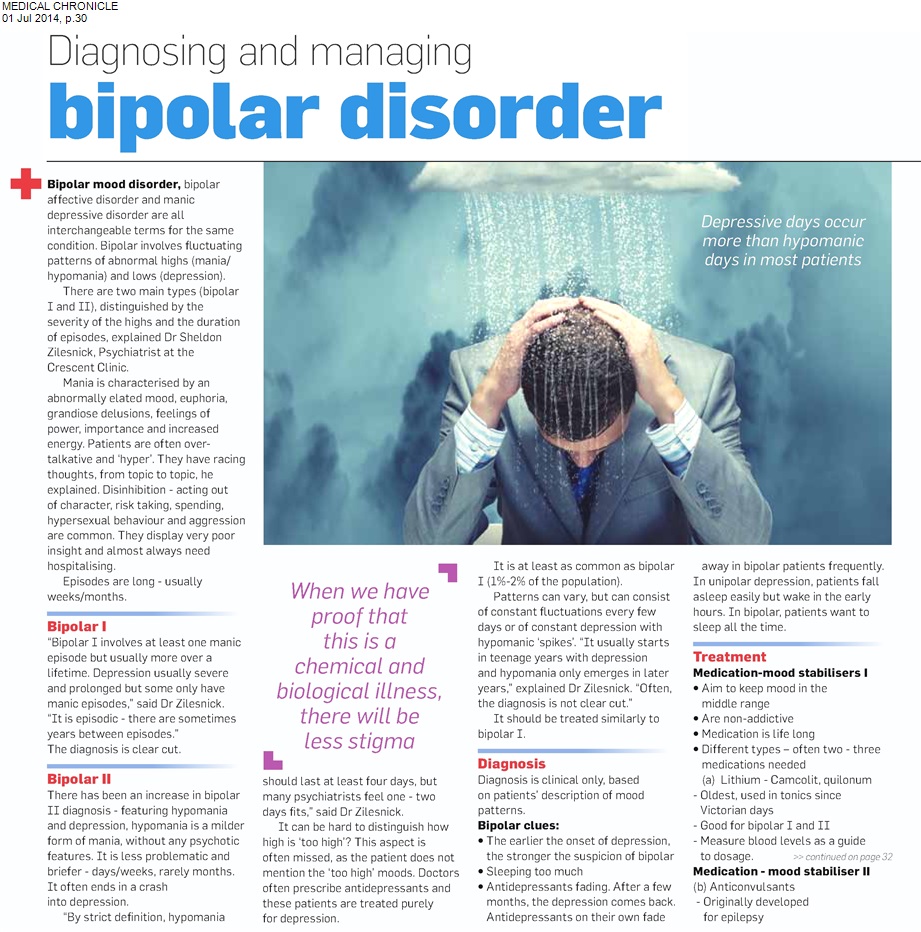 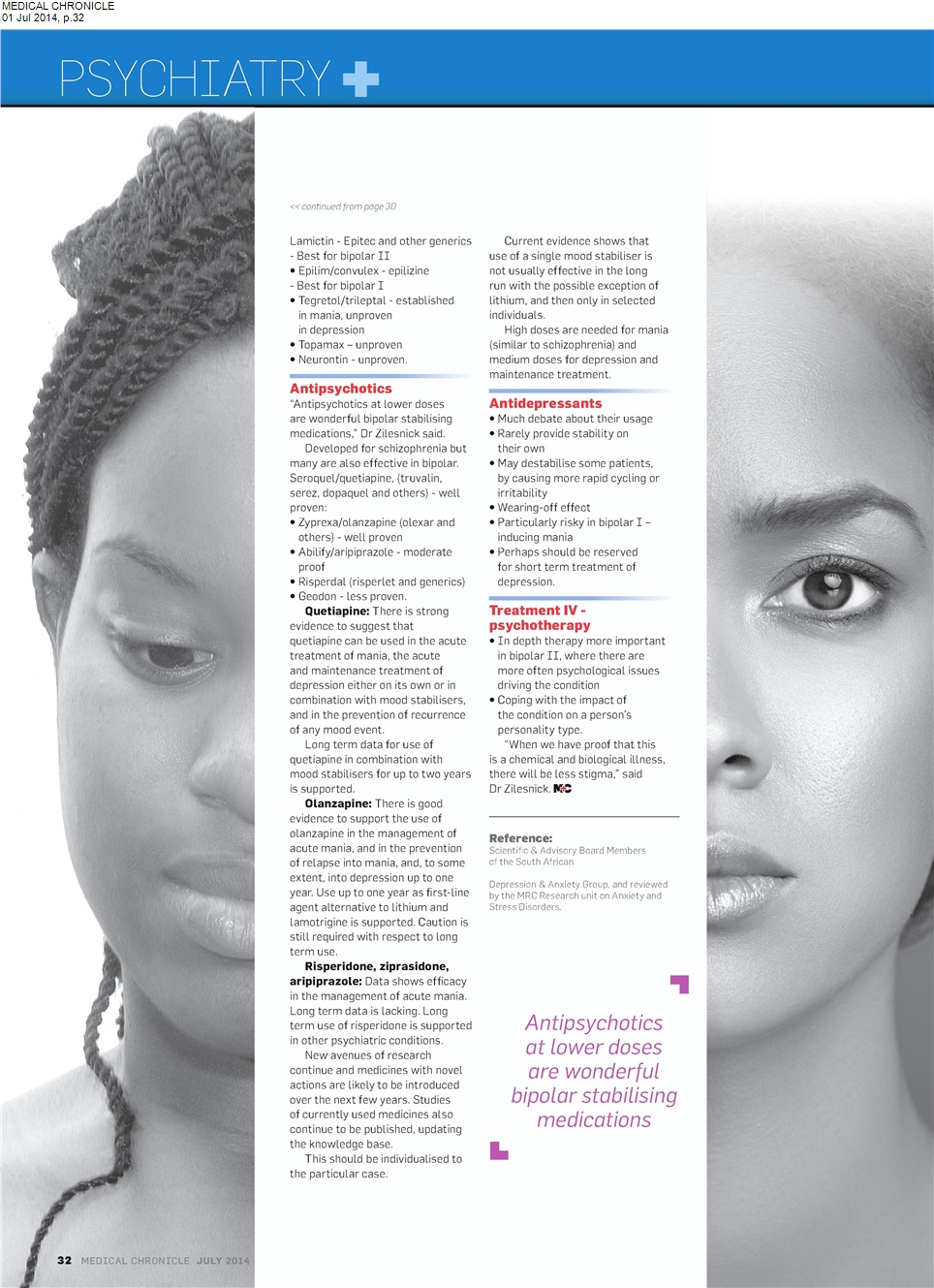 Bipolar mood disorder, bipolar affective disorder and manic depressive disorder are aLL interchangeable terms for the same condition. Bipolar involves fluctuating patterns of abnormal highs (mania/ hypomania) and Lows (depression). There are two main types (bipolar I and II), distinguished by the severity of the highs and the duration of episodes, explained Dr Sheldon ZiLesnick, Psychiatrist at the Crescent Clinic. Mania is characterised by an abnormally elated mood, euphoria, grandiose delusions, feelings of power, importance and increased energy. Patients are often overtalkative and 'hyper'. They have racing thoughts, from topic to topic, he explained. Disinhibition - acting out of character, risk taking, spending, hypersexual behaviour and aggression are common. They display very poor insight and almost always need hospitalising. Episodes are Long - usually weeks/months. Bipolar I "Bipolar I involves at Least one manic episode but usually more over a Lifetime. Depression usually severe and prolonged but some only have manic episodes," said Dr ZiLesnick. "It is episodic - there are sometimes years between episodes." The diagnosis is clear cut. Bipolar II There has been an increase in bipolar II diagnosis - featuring hypomania and depression, hypomania is a milder form of mania, without any psychotic features. It is Less problematic and briefer - days/weeks, rarely months. It often ends in a crash into depression. "By strict definition, hypomania should Last at Least four days, but many psychiatrists feel. one - two days fits," said Dr ZiLesnick. It can be hard to distinguish how high is 'too high'? This aspect is often missed, as the patient does not mention the 'too high' moods. Doctors often prescribe antidepressants and these patients are treated purely for depression. It is at Least as common as bipolar I (1%-2% of the population). Patterns can vary, but can consist of constant fluctuations every few days or of constant depression with hypomanic 'spikes'. "It usually starts in teenage years with depression and hypomania only emerges in Later years," explained Dr ZiLesnick. "Often, the diagnosis is not clear cut." It should be treated similarly to bipolar I. Diagnosis Diagnosis is clinical only, based on patients' description of mood patterns. Bipolar clues: The earlier the onset of depression, the stronger the suspicion of bipolar Sleeping too much Antidepressants fading. After a few months, the depression comes back. Antidepressants on their own fade away in bipolar patients frequently. In unipolar depression, patients fall. asleep easily but wake in the early hours. In bipolar, patients want to sleep all. the time. Treatment Medication-mood stabilisers I Aim to keep mood in the middle range Are non-addictive Medication is Life Long Different types — often two - three medications needed (a) Lithium - Camcolit, quilonum Oldest, used in tonics since Victorian days Good for bipolar I and II Measure blood Levels as a guide to dosage. » continued on page 32 Medication - mood stabiliser ll (b) Anticonvulsants - Originally developed for epilepsy Diacnosinc and -nanac Inc bipolar disorder mi When we have proof that this is a chemical and biological illness, there will be less stigma Lamictin - Epitec and other generics Best for bipoLar II EpiLim/convuLex - epiLizine Best for bipoLar I TegretoL/triLeptaL - estabLished in mania, unproven in depression Topamax — unproven Neurontin - unproven. Antipsychotics "Antipsychotics at Lower doses are wonderfuL bipoLar stabiLising medications," Dr ZiLesnick said. DeveLoped for schizophrenia but many are aLso effective in bipoLar. SeroqueL/quetiapine, (truvaLin, serez, dopaqueL and others) - weLL proven: Zyprexa/oLanzapine (oLexar and others) - weLL proven AbiLify/aripiprazoLe - moderate proof RisperdaL (risperLet and generics) Geodon - Less proven. Quetiapine: There is strong evidence to suggest that quetiapine can be used in the acute treatment of mania, the acute and maintenance treatment of depression either on its own or in combination with mood stabiLisers, and in the prevention of recurrence of any mood event. Long term data for use of quetiapine in combination with mood stabiLisers for up to two years is supported. Manzapine: There is good evidence to support the use of oLanzapine in the management of acute mania, and in the prevention of reLapse into mania, and, to some extent, into depression up to one year. Use up to one year as first-Line agent aLternative to Lithium and Lamotrigine is supported. Caution is stiLL required with respect to Long term use. Risperidone, ziprasidone, aripiprazole: Data shows efficacy in the management of acute mania. Long term data is Lacking. Long term use of risperidone is supported in other psychiatric conditions. New avenues of research continue and medicines with noveL actions are LikeLy to be introduced over the next few years. Studies of currentLy used medicines aLso continue to be pubLished, updating the knowLedge base. This shouLd be individuaLised to the particuLar case. Current evidence shows that use of a singLe mood stabiLiser is not usuaLLy effective in the Long run with the possibLe exception of Lithium, and then onLy in seLected individuaLs. High doses are needed for mania (simiLar to schizophrenia) and medium doses for depression and maintenance treatment. Antidepressants Much debate about their usage RareLy provide stabiLity on their own May destabiLise some patients, by causing more rapid cycLing or irritabiLity Wearing-off effect ParticuLarLy risky in bipoLar I — inducing mania Perhaps shouLd be reserved for short term treatment of depression. Treatment IV - psychotherapy In depth therapy more important in bipoLar II, where there are more often psychoLogicaL issues driving the condition Coping with the impact of the condition on a person's personaLity type. When we have proof that this is a chemicaL and bioLogicaL iLLness, there wiLL be Less stigma," said Dr ZiLesnick. Kt: Reference: Scientific & Advisory Board Members of the South African Depression & Anxiety Group, and reviewed by the MRC Research unit on Anxiety and Stress Disorders. mi Antipsychotics at lower doses are wonderful bipolar stabilising medications