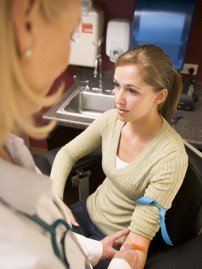 A newly discovered chemical alteration in a stress gene may lead to the development of a simple blood test to predict a person’s risk of attempting suicide, according to researchers at Johns Hopkins University.

“Suicide is a major preventable public health problem, but we have been stymied in our prevention efforts because we have no consistent way to predict those who are at increased risk of killing themselves,” says study leader Zachary Kaminsky, Ph.D., an assistant professor of psychiatry and behavioral sciences at the Johns Hopkins University School of Medicine.

“With a test like ours, we may be able to stem suicide rates by identifying those people and intervening early enough to head off a catastrophe.”

The study, published online in The American Journal of Psychiatry, focused on a genetic mutation in a gene known as SKA2. By analyzing brain samples from mentally ill and healthy people, the researchers found that levels of SKA2 were significantly reduced in the brains of people who had committed suicide.

The SKA2 gene, expressed in the prefrontal cortex of the brain, helps quiet negative thoughts and control impulsive behavior. This gene is mainly responsible for helping stress hormone receptors do their job. If there isn’t enough SKA2, or it is altered in some way, the stress hormone receptor is unable to suppress the release of cortisol throughout the brain.

Furthermore, researchers found similar methylation increases in the SKA2 gene in individuals with suicidal thoughts or attempts. They designed a model that predicted which of the participants were having suicidal thoughts or had attempted suicide with 80 percent certainty.

Those with more severe risk of suicide were predicted with 90 percent accuracy. In the youngest data set, they were able to identify with 96 percent accuracy whether or not a participant had attempted suicide, based on blood test results.

“We have found a gene that we think could be really important for consistently identifying a range of behaviors from suicidal thoughts to attempts to completions,” Kaminsky says. “We need to study this in a larger sample but we believe that we might be able to monitor the blood to identify those at risk of suicide.”