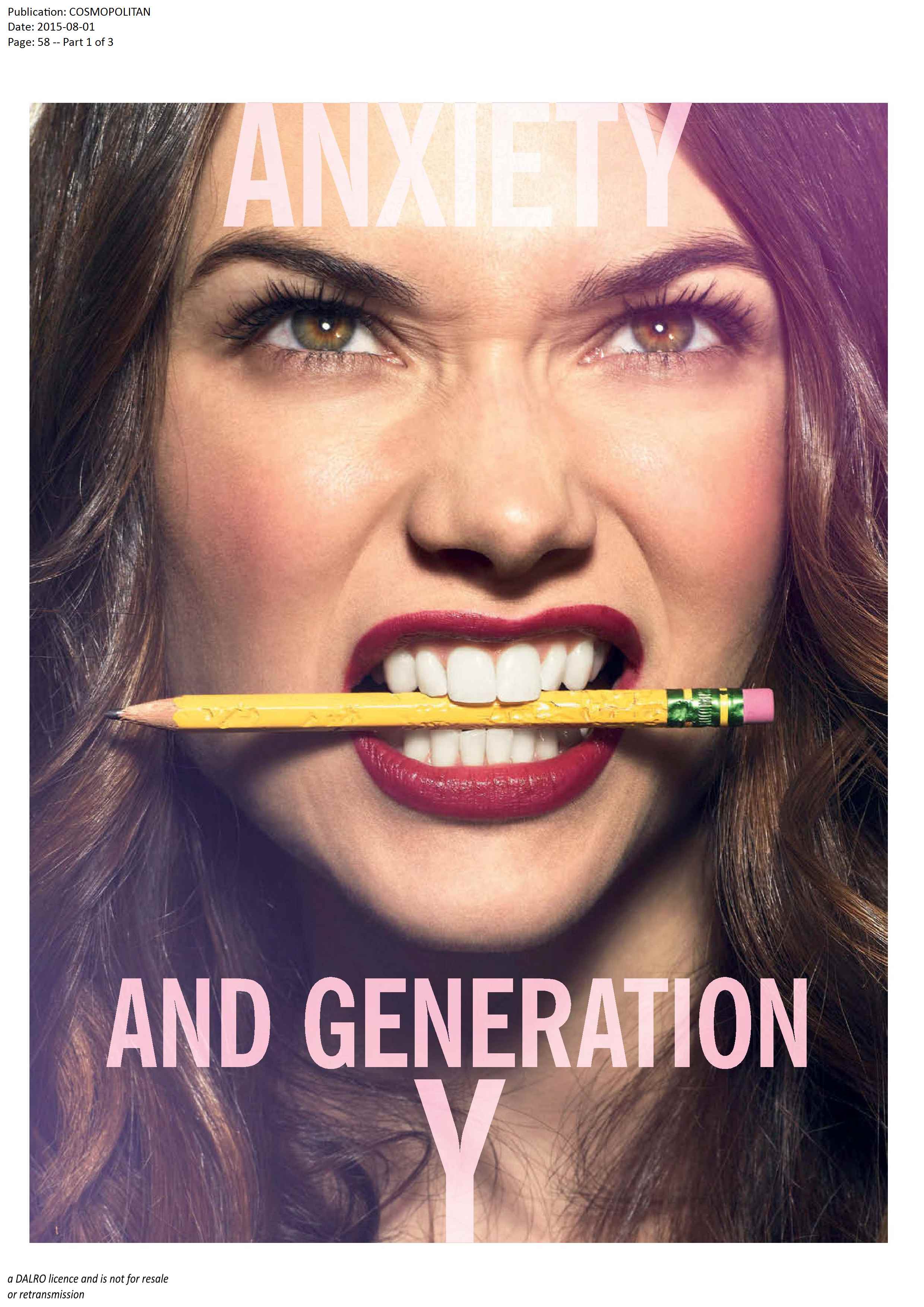 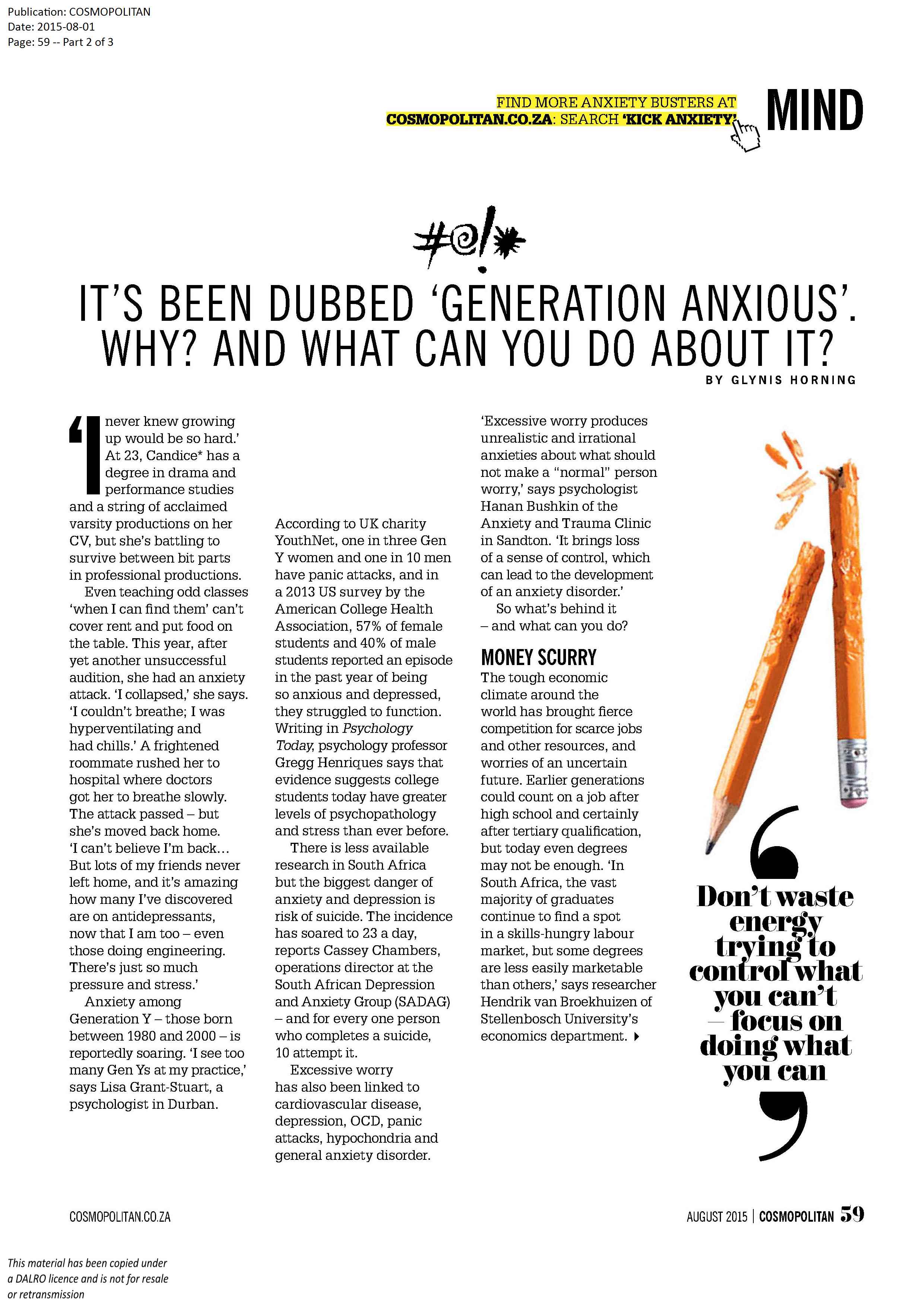 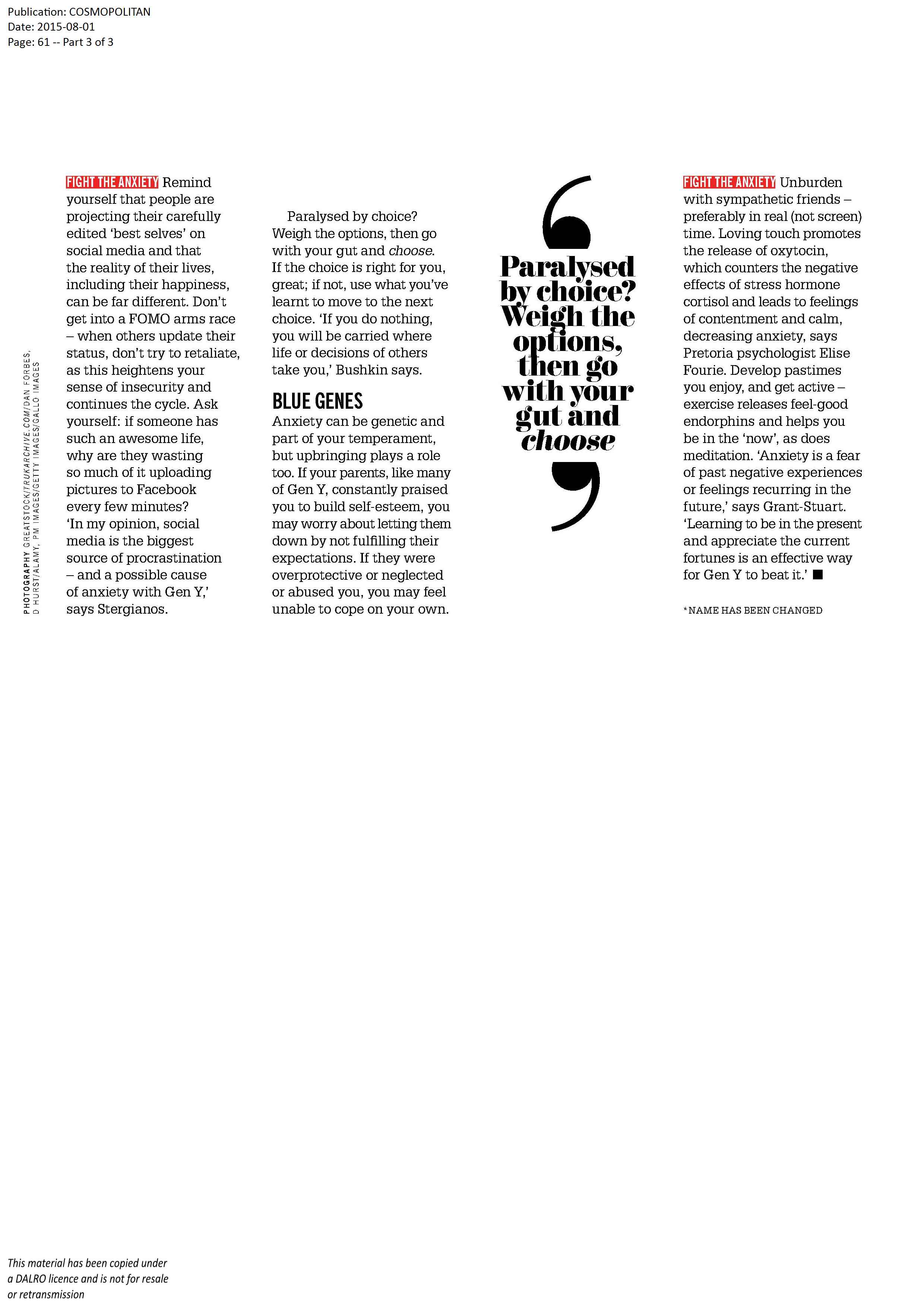 At 23, Candice* has a degree in drama and performance studies and a string of acclaimed varsity productions on her CV, but she's battling to survive between bit parts in professional productions. Even teaching odd classes 'when I can find them' can't cover rent and put food on the table. This year, after yet another unsuccessful audition, she had an anxiety attack. 'I collapsed,' she says. 'I couldn't breathe; I was hyperventilating and had chills.' A frightened roommate rushed her to hospital where doctors got her to breathe slowly. The attack passed - but she's moved back home. 'I can't believe I'm back... But lots of my friends never left home, and it's amazing how many Ihre discovered are on antidepressants, now that I am too - even those doing engineering. There's just so much pressure and stress.' Anxiety among Generation Y - those born between 1980 and 2000 - is reportedly soaring. 'I see too many Gen Ys at my practice,' says Lisa Grant-Stuart, a psychologist in Durban. 4 never knew growing up would be so hard.' COSMOPOLITANCOZA FIND MORE ANXIETY BUSTERS AT CotrMOPOLrrAN.co.zA: SEARCH 'KICK "Tie #Q* |T’S BEEN DUBBED ‘GENERATION AN)(100S'. WHY? AND WHAT CAN YOU DO ABOUT IT? According to UK charity YouthNet, one in three Gen Y women and one in 10 men have panic attacks, and in a 2013 US survey by the American College Health Association, 57% of female students and 40% of male students reported an episode in the past year of being so anxious and depressed, they struggled to function. Writing in Psychology Today, psychology professor Gregg Henriques says that evidence suggests college students today have greater levels of psychopathology and stress than ever before. There is less available research in South Africa but the biggest danger of anxiety and depression is risk of suicide. The incidence has soared to 23 a day, reports Cassey Chambers, operations director at the South African Depression and Anxiety Group (SADAG) - and for every one person who completes a suicide, 10 attempt it. Excessive worry has also been linked to cardiovascular disease, depression, OCD, panic attacks, hypochondria and general anxiety disorder. 'Excessive worry produces unrealistic and irrational anxieties about what should not make a "normal" person worry,' says psychologist Hanan Bushkin of the Anxiety and Trauma Clinic in Sandton. 'It brings loss of a sense of control, which can lead to the development of an anxiety disorder.' So what's behind it - and what can you do? MONEY SCURRY The tough economic climate around the world has brought fierce competition for scarce jobs and other resources, and worries of an uncertain future. Earlier generations could count on a job after high school and certainly after tertiary qualification, but today even degrees may not be enough. 'In South Africa, the vast majority of graduates continue to find a spot in a skills-hungry labour market, but some degrees are less easily marketable than others,' says researcher Hendrik van Broekhuizen of Stellenbosch University's economics department. F BY GLYNIS HORNING Don't waste errerlg}; two o con o what you ean't i focus on doing what you can AUGUST 2015 l COSMOPOLITAN 39 PHOTOGRAPHY GREATSTOCK/TRUKARCHIVE.COM/DAN FORBES, D HURST/ALAIVIY, PIVI IMAGES/GETTY lh/lAGES/GALLO IMAGES Remind yourself that people are projecting their carefully edited 'best selves' on social media and that the reality of their lives, including their happiness, can be far different. Don't get into a FOMO arms race - when others update their status, don't try to retaliate, as this heightens your sense of insecurity and continues the cycle. Ask yourself: if someone has such an awesome life, why are they wasting so much of it uploading pictures to Facebook every few minutes? 'In my opinion, social media is the biggest source of procrastination - and a possible cause of anxiety with Gen Y,' says Stergianos. Paralysed by choice? Weigh the options, then go with your gut and choose. If the choice is right for you, great; if not, use what you've learnt to move to the next choice. 'lf you do nothing, you will be carried where life or decisions of others take you,' Bushkin says. BLUE GENES Anxiety can be genetic and part of your temperament, but upbringing plays a role too. If your parents, like many of Gen Y, constantly praised you to build self-esteem, you may worry about letting them down by not fulfilling their expectations. If they were overprotective or neglected or abused you, you may feel unable to cope on your own. choice? t en tio' with your choose Unburden with sympathetic friends preferably in real (not screen) time. Loving touch promotes the release of oxytocin, which counters the negative effects of stress hormone cortisol and leads to feelings of contentment and calm, decreasing anxiety, says Pretoria psychologist Elise Fourie. Develop pastimes you enjoy, and get active exercise releases feel-good endorphins and helps you be in the 'now', as does meditation. Anxiety is a fear of past negative experiences or feelings recurring in the future,' says Grant-Stuart. ‘Learning to be in the present and appreciate the current fortunes is an effective way for Gen Y to beat it.' I * NAME HAS BEEN CHANGED