Do You Know What to Say When Someone Has an Anxiety or Panic Attack? (9 November 2016) 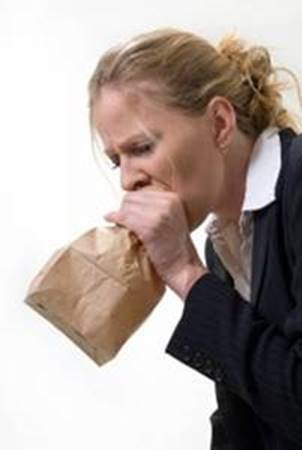 Saying the wrong thing can do more harm than good, but don’t worry! We’ll guide you on how to help.
As someone who suffers all too frequently with panic disorder, I can tell you that sometimes, there’s just nothing to do but get through it. Friends, and family may try to help but truthfully, they can make it worse.

If you haven’t actually had the experience of a panic attack (Congrats!), then you may not understand what the body goes through. Lucky for me (ha!), I can tell you first hand what an anxiety attack is like.

Have you ever had a drink of water and chugged it so fast, it went down your air pipe? That feeling of having to choke and not being able to breathe? Yes, well, that’s one part of it.
Ever feel like there’s a weight on your chest and your lungs are restricted? That’s another!

How about the sweats? Yup! Rapid cycling thoughts? Thinking you’re going to die when in practicality, you’re not? Nausea? Yup, yup, and yup!

Think only crazy people have anxiety? NOPE! According to National Institute of Mental Health, about 40 MILLION people, ages 18 to 54 within the United States, suffer with an anxiety disorder. If you’re not the one dealing with anxiety, then it’s likely you know someone who does.
There ARE ways to help! Be compassionate with the person, before, during, and after their attack.

You can offer to bring them to a place of comfort, outside of their trigger zone, if you’re able. You can try distracting them with a funny story, a cute anecdote, or something you know they enjoy, but try not to invoke an emotion other than happiness. Bringing up a story about their deceased loved one, even if in jest, could cause an even worse situation.
For me, drinking ice-cold water helps. I’ve talked to many people who feel the same way, an ice-cold jolt brings them out of their panic cycle and is calming. That may not work for everyone, so don’t go throwing ice at your friend’s face; just saying! (But you could suggest a cold shower. It’s been shown to help!)

Here’s the thing: You may think you’re being useful by saying certain common phrases that seem helpful, but they’re not. I’ve created a list of things people have said to me during a panic attack. Word of advice: Don’t say these things. But lucky for you, I’m also including some helpful ways to make the situation less awkward for everyone.

I totally appreciate what you are trying to do, but telling me to relax has the complete OPPOSITE effect. Seriously, if it were that easy to relax, I wouldn’t be in the middle of a panic attack.

INSTEAD, SAY: Is there anything I can do to help you right now?
Honestly, just knowing we have someone next to us who’s understanding and willing to run to the store to get a paper bag to breathe into can do wonders!

So, technically, you’re probably right. Everything WILL work out, most times. But saying that to me while I’m panicking just makes me feel like you’re dismissing me. At the moment that my head is spinning, I can’t think rationally. Despite all signs pointing to good things, I see it as DANGER DANGER. Thank you, but no.

INSTEAD, SAY: Whatever happens, we’ll figure out a way to make it right.
Even though it may be a situation that can’t be resolved, just being reminded in that moment that there’s someone willing to work with me on something, and even giving a glimmer of hope, helps TREMENDOUSLY.

OF COURSE it’s in my head. Anxiety is a diagnosable MENTAL illness. That doesn’t make it any easier to deal with. You telling me it’s in my head just makes me more embarrassed about what I’m going through!

INSTEAD, SAY: I’m here if you want to talk about what’s upsetting you and work through it.
Phew! I can’t tell you how many times a panic attack has been squashed just by breaking down all the moving parts into tiny fixable situations.

Maybe you do. But more than likely, you don’t. Even those with anxiety may not know what I’m going through because the symptoms fall on such a large spectrum and vary person to person.

INSTEAD, SAY: I wish I could understand how you feel, but I don’t. I respect your feelings and will do anything you need me to do to feel better.
OK! So, obviously, I’m not going to be like, “I need a piece of cheese from Whatever County 100 miles away to feel better.” Even though cheese always does help. But knowing you’re willing to help makes things a bit easier to swallow.

5. DON’T SAY: There Are People With Bigger Problems Than You.

Yes, I’m well aware there’s starving children in the world and people with incurable diseases. However, when I’m in the midst of an anxiety attack, all I can think about is my little small world. Not only that, I have GUILT about feeling the way I do KNOWING I don’t have it that bad. But thanks for reminding me!

INSTEAD, SAY: Nothing.
I’d rather you be quiet than tell me about people who have it worse. There’s no way to spin that into something better.

It’s very likely that I know all the things in my life I should be happy about. It’s also very likely that it’s those VERY things I’m worried about. Sometimes, I get into a panic just thinking about LOSING everyone I love, or even the roof over my head.

INSTEAD, SAY: Try thinking about the big picture here.
Sometimes, I get so caught up in all the tiny minutiae of life that it’s hard for me to remember that I have an entire world of good things. Just don’t TELL me I have good things. Walk around it. Just…walk around it.

This is tricky. Some people do self-medicate with alcohol or drugs, but that’s not how I roll. And even though a drink or two may solve the problem momentarily, it’s not a long-term fix and may even exasperate the condition even more. Don’t offer drinks, because the person you may ask might not be able to say no.

INSTEAD, SAY: Want to grab a bite to eat?
This is a good opportunity to be distracted by people, music, eating, and a perfect place to talk things over.

Trust me, I’m just as bothered as you are. But as a friend or relative, it’s actually really rude and inconsiderate to say this to someone while they’re suffering. It’s harder on the person with anxiety than you. Be nice, and get over it!

INSTEAD, SAY: I wish I knew a way to make you feel better. If there’s anything I can do, just let me know!
It sounds repetitive, I know. But seriously, knowing someone is there to offer help in our moment of crisis means the WORLD!

That just makes us feel like we’re really alone, you know, when you leave us alone. Especially if we’re in a public place, don’t leave your panicked friend alone. Our minds are running wild and we need your support. If you don’t know how to handle the situation, your best bet is just to ASK the person what they need from you.

INSTEAD, SAY: Do you want to be alone? Do you want me to stay? I’ll do whatever makes you comfortable.
Because sometimes we DO want alone time, but not having someone just leave us in haste. Asking what the person wants is a good way to connect and open dialogue.

Though I appreciate your sales pitch, I REALLY do, now is not the time. It’s like when I’m in the mood for macaroni and cheese and my husband says, “Oh, I’ll pick up some next week.” HOW DOES THAT HELP ME NOW? It doesn’t. So don’t do it.

WHAT TO DO INSTEAD: Every situation is different. Every person handles anxiety in different ways. Offer your loved one a hand; don’t force contact, but let them know your hand is free. Call me crazy (actually, don’t!) but sometimes just holding someone’s hand can be more calming than any words.

This guest article originally appeared on YourTango.com: What You Should (And Should NOT) Say When Someone Has A Panic Attack.