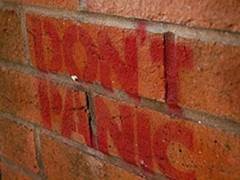 Panic attacks are awful. In the past week, I’ve come close to having three. One was serious and two I was able to get under control before fully going under. I very rarely have panic attacks. Sure, I have anxiety issues, but that’s not the same thing. So when I went out of control I had no idea what was happening. I couldn’t see the tornado from the inside.

It’s been a very rough time recently: moving, roller derby, work, basically a lot. Finally, a small, stupid situation pushed me over the edge. I was angry, had trouble breathing, was crying incessantly and I couldn’t figure out why. I thought I was going completely insane. This was it. The big one that I would never come back from. I was terrified. Then my husband sat me down and told me I was having a panic attack.

Panic attack. It made sense. Like most things, putting a name to it makes it less powerful. The unknown is scary. At least when it has a name you know someone has been there before and lived to tell the tale. So that meant I could too, and the next time one came around, I would be able to recognize the symptoms:

The attacks usually peak at about 10 minutes, but the anxiety leading up to an attack varies. A lot of times a panic attack happens without reason, even during sleep. It’s understandable that on top of the anxiety that caused the panic attack, the mental state itself is frightening. But what does cause a panic attack? Well, there’s bad news on that front. No one really knows. Panic disorder can be linked to family history/genetics, major stressful events, medication side effects or comorbidity with other mental disorders.

Around 20% of patients with bipolar I have had at least one panic attack. A patient with a history of panic attacks is also more likely to have shorter times in euthymic stages. If you have consistent panic attacks, have fear of another attack or a change in behavior because of an attack, you may want to speak to your doctor about panic disorder. It’s not uncommon for bipolar patients to have anxiety disorders, and panic disorder falls under that category.

It may be hard to imagine exactly what a panic attack feels like if you’ve never had one, but hopefully knowing the symptoms will help you recognize them should you ever experience one. Talk to your doctor if it becomes a problem that may require medication. If you do find yourself starting to show symptoms of a panic attack, you may need to take medication, but you also may be able to calm yourself without it. Here are some exercises I find helpful to reach a calm, safe state:

Panic attacks are frightening, and they are serious, but they don’t have to control you.