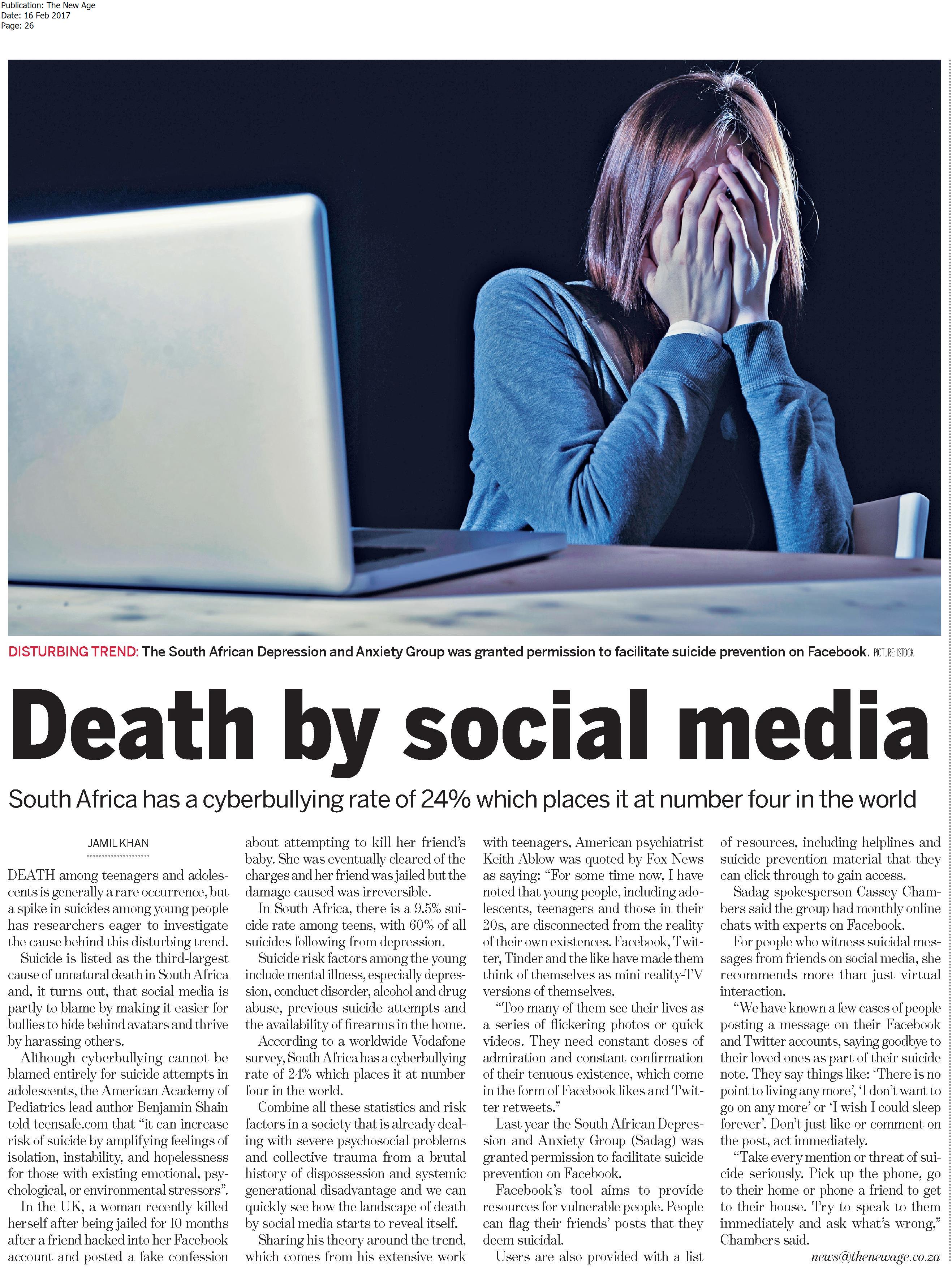 South Africa has a cyberbullying rate of 24% which places it at number four in the world DEATH among teenagers and adolescents is generally a rare occurrence, but a spike in suicides among young people has researchers eager to investigate the cause behind this disturbing trend. Suicide is listed as the thirdlargest cause of unnatural death in South Africa and, it turns out, that social media is partly to blame by making it easier for bullies to hide behind avatars and thrive by harassing others. Although cyberbullying cannot be blamed entirely for suicide attempts in adolescents, the American Academy of Pediatrics lead author Benjamin Shain told teensafe.com that "it can increase risk of suicide by amplifying feelings of isolation, instability, and hopelessness for those with existing emotional, psychological, or environmental stressors". In the UK, a woman recently killed herself after being jailed for 10 months after a friend hacked into her Facebook account and posted a fake confession about attempting to kill her friend's baby. She was eventually cleared of the charges and her friend was jailed but the damage caused was irreversible. In South Africa, there is a 9.5% suicide rate among teens, with 60% of all suicides following from depression. Suicide risk factors among the young include mental illness, especially depression, conduct disorder, alcohol and drug abuse, previous suicide attempts and the availability of firearms in the home. According to a worldwide Vodafone survey, South Africa has a cyberbullying rate of 24% which places it at number four in the world. Combine all these statistics and risk factors in a society that is already dealing with severe psychosocial problems and collective trauma from a brutal history of dispossession and systemic generational disadvantage and we can quickly see how the landscape of death by social media starts to reveal itself. Sharing his theory around the trend, which.comes from his extensive work with teenagers, American psychiatrist Keith Ablow was quoted by Fox News as saying: "For some time now, I have noted that young people, including adolescents, teenagers and those in their 20s, are disconnected from the reality of their own existences. Facebook, Twitter, Tinder and the like have made them think of themselves as mini realityTV versions of themselves. "Too many of them see their lives as a series of flickering photos or quick videos. They need constant doses of admiration and constant confirmation of their tenuous existence, which.come in the form of Facebook likes and Twitter retweets." Last year the South African Depression and Anxiety Group (Sadag) was granted permission to facilitate suicide prevention on Facebook. Facebook's tool aims to provide resources for vulnerable people. People can flag their friends' posts that they deem suicidal. Users are also provided with a list of resources, including helplines and suicide prevention material that they can click through to gain access. Sadag spokesperson Cassey Chambers said the group had monthly online chats with experts on Facebook. For people who witness suicidal messages from friends on social media, she recommends more than just virtual interaction. "We have known a few cases of people posting a message on their Facebook and Twitter accounts, saying goodbye to their loved ones as part of their suicide note. They say things like: 'There is no point to living any more', 'I don't want to go on any more' or 'I wish I could sleep forever'. Don't just like or.comment on the post, act immediately. "Take every mention or threat of suicide seriously. Pick up the phone, go to their home or phone a friend to get to their house. Try to speak to them immediately and ask what's wrong," Chambers said. This email address is being protected from spambots. You need JavaScript enabled to view it. DISTURBING TREND: The South African Depression and Anxiety Group was granted permission to facilitate suicide prevention on Facebook. PICTURE ISTOCKDeath by social media JAM IL KHAN