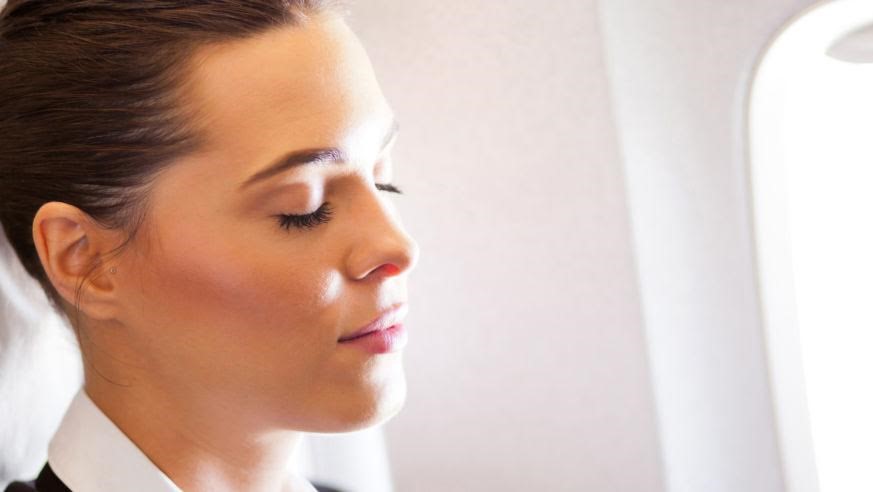 If you or someone you know struggles with fear of flying, these 10 expert strategies will help ensure a comfortable, panic-free flight.

Does the idea of flying cause you to break out in a cold sweat? You aren't alone. More than 25 million Americans suffer from some form of flight anxiety, making aerophobia (fear of flying) the second biggest fear in the U.S. after public speaking. If you do fall in this category, you've probably had friends and family remind you numerous times that flying is the safest mode of transportation. While that's very true—your chances of dying in a plane crash are about one in 10 million compared with a one-in-272 chance of dying in a car crash—that's not always enough to quell the jitters. And advice like showing up early at the airport to eliminate unnecessary stress is practical as well, but for the most nervous nellies among us, it takes a little bit more to get us up in the air. We turned to the experts—Todd Farchione, Ph.D., of Boston University's Center for Anxiety & Related Disorders, Martin N. Seif, Ph.D., ABPP, of the Anxiety & Phobia Treatment Center, and Captain Steve Allright of British Airways' Flying With Confidence program—to find out exactly what to do to help alleviate flight anxiety. Thanks to their advice, we put together a 10-step guide to help you conquer your fear—because nothing should stand between you and the vacation you deserve.

Figuring out what triggers your fear in the first place is an important first step toward conquering flight anxiety. Different aspects of flying can trigger different fears depending on the person—for instance, one person may be afraid of turbulence and feel nervous during a perfectly normal takeoff, while an individual with germaphobic tendencies may be more concerned about the spread of germs in a confined space. "The common denominator for more than 90 percent of flight phobics is the fear that they will become overwhelmed with anxiety during the flight," says Seif, a clinical psychologist who runs the Freedom to Fly program at the Anxiety & Phobia Treatment Center in White Plains, New York. It helps to recognize that your phobia is irrational, but you need to be able to pinpoint the cause of your fear before you can take that next step.

2. FAMILIARIZE YOURSELF WITH AIRPLANE NOISES

You're about to land and the plane is rattling like both of its wheels are about to fall off—is it time to panic? No, the carry-on luggage and the seat-back tables are shifting slightly—just like they do every time the plane takes off and lands. Sometimes all it takes to combat anxiety is a little information. Read up on the typical bumps and noises that may occur during a flight. It also helps to understand just how rigorous safety measures are for aircrafts. AOL Travel did an excellent report back in 2010 on everything a plane must go through before it's deemed worthy of your ridership—including being able to support one-and-a-half times the maximum load it would ever carry and weathering environmental extremes such as 120-degree temperatures. "Our anxiety is fed by 'what if?' catastrophic thoughts. Once you become knowledgeable, your 'what if' thoughts will be limited by the facts," said Seif.

While turbulence is a perfectly normal part of flying—it happens when the plane encounters normal weather patterns like air currents or clouds—the idea of shaking while in the air can be very unsettling. Turbcast (iTunes, $1.99) was designed by a pilot and analyzes weather patterns as a pilot would, giving fliers an inside look at factors like air pockets and thunderstorms that can cause turbulence in the first place. Translation: The more you know about what causes that shaky feeling and how much of it you can expect while you're airborne, the less you'll be afraid of it.

4. BRING A PHOTO OF YOUR DESTINATION

Visualizing your destination and imagining yourself there can be a powerful antidote to stress—and can help keep you focused on the prize at the end of the journey. You can do this with or without a photo, but having a physical image to refer to—whether it's a picture you've downloaded on your phone or a postcard—can help to keep your mind from wandering. Allright says another method is to "imagine yourself in a safe place, somewhere you feel comfortable and safe. Your bedroom, perhaps, or on a beach. Take yourself there with your eyes closed and relax." The idea is to take your mind off the little things that make you nervous about flying and focus on the positive aspects of your journey.

Captain Allright says to avoid both caffeine and alcohol, as they can leave you feeling more dehydrated during the flight. Nervous fliers should avoid a seemingly comforting pre-flight alcoholic beverage, since alcohol can also make it harder for your body to adjust to being airborne and bring on a nasty bout of jet lag. Instead, opt for water and a light meal pre-flight, or carry along a light snack like carrot sticks, nuts, or an apple to keep you feeling nourished.

In a nutshell—distraction works. Airlines now provide the little comforts of home—like televisions, music channels, and magazines—to help distract you from noises and bumps during the flight and make you feel more at home in a strange place. One of the best ways to distract yourself during a flight is to bring a book that you've already started and are deeply engrossed in or a season of your favorite television show. Farchione says if people associate televisions with being safe at home, and there's a television on the plane, they will feel similar familiar feelings of comfort.

Dr. Seif says it's a good idea to let others know you're not too keen on flying—you may be able to speak to the pilot briefly while you board the plane or receive extra attention from flight attendants during the flight. If you're traveling with friends or family members, talk to them about what makes you nervous so they can help alleviate the tension, but don't let the conversation spiral into a contest over who has had the scariest flight experience. Sometimes just knowing that others are available to help you in case your anxiety surfaces is enough to help keep that anxiety in check.

No, your plane is not going to crash (and whatever you do, do NOT start envisioning disaster scenarios). But knowing that you're prepared for anything can be empowering. Watch an airline safety video while you're still in the comfort of your home so that you can "master" the procedure in your head (Air New Zealand did an especially entertaining take on the safety video, featuring characters from The Hobbit, as well as a hilarious safety video starring fitness guru Richard Simmons). Once you're on board the aircraft, take time to read the airline safety card in the seat pocket in front of you. If it makes you feel better, you could even go so far as to book your seat in the back of the plane, which has been repeatedly shown to be the safest part of the aircraft in the event of a crash.

9. USE THIS BREATHING TECHNIQUE

Alright says deep breathing is very important during takeoff and other points during the flight where you experience anxiety. "If someone is very anxious, it is actually very difficult to change their breathing pattern," he says. "Try holding your breath and then deep breathing, or better still, force yourself to breathe out for as long as you can and then take a long, deep breath." Seif and Farchione both recommended taking deep breaths, since this triggers the calming response and can help to prevent hyperventilation. Try to maintain a relaxed posture as well, and not cling to the chair's armrests, since this can heighten any anxiety you may be feeling.

Some doctors prescribe anxious fliers with fast-acting anxiety medications like Xanax or Valium, but Farchione warns that you should be aware that each has its own side effects and that you may feel tired for hours after the plane has landed. If you don't have a prescription, herbal remedies like St. John's Wort or Scullcap may help calm nerves too, according to an article by USA Today. Bring the medication or the herbal remedy, but hold onto it as a "last resort" option. When you feel jitters coming on, start by employing a minor relaxant, such as sipping chamomile or peppermint tea. Farchione says that doing the things you associate with being calm and content will help remind you to remain calm as you fly. You may find that simply knowing the medication is there in case of emergency is comforting enough—and you can reap the benefits without the side effects.