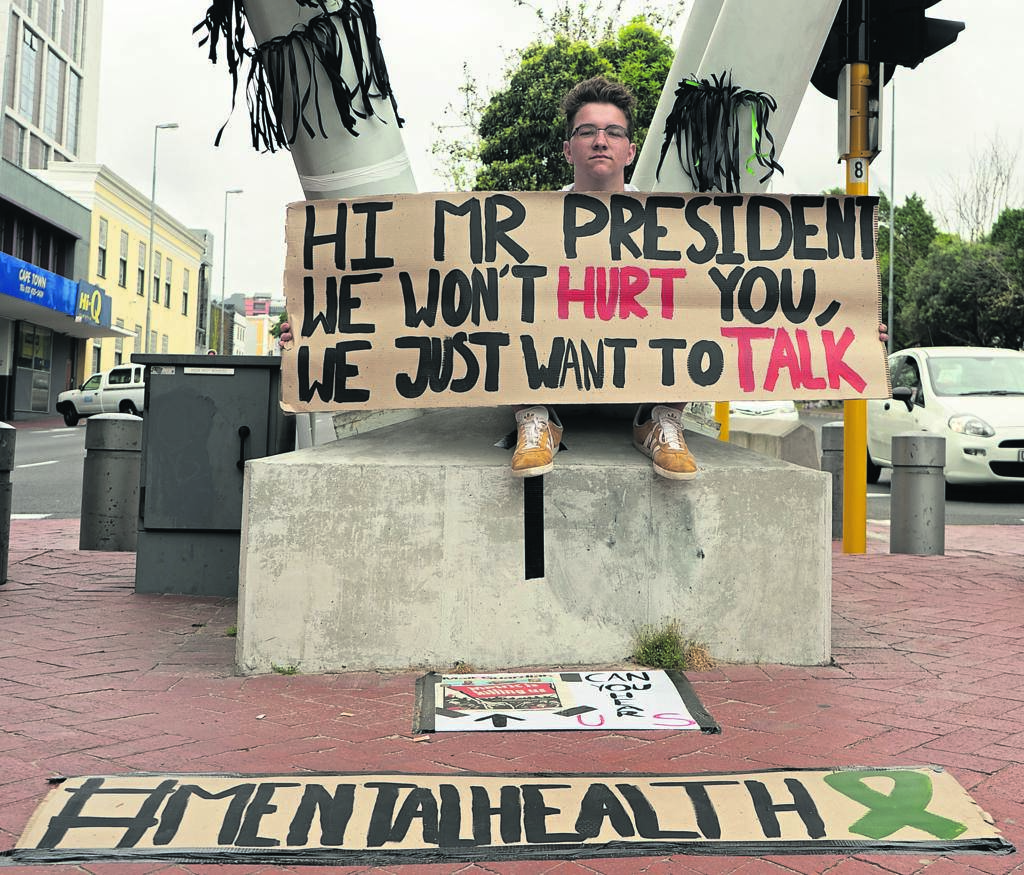 Christopher Kleynhans at the Fanwalk bridge. He handed out educational flyers to passsing motorists and pedestrians. PHOTO: Carla Meyer-Kleynhans

Urgent intervention is needed to raise awareness about mental health issues in the country and across the globe.

So says Christopher Kleynhans, founder of Swim for Change.

He was speaking at a public demonstration on Tuesday 10 September to promote awareness about mental health and suicide prevention. The demonstration was held at the Fanwalk bridge in the CBD. Over 1 000 black and green ribbons were attached to the pillars of the bridge to highlight World Suicide Prevention Day, commemorated globally on 10 September.

The black ribbons were in remembrance of those who committed suicide while the green ones represented the importance of raising awareness about mental health.

Kleynhans says mental health is often viewed as a sign of weakness – and a “patriarchal culture is one of the things that make it so much worse”.

He says Swim for Change has been trying to change people’s mindset and to spread the word around mental health since 2015. The youth-driven non-profit-organisation focuses on mental health awareness and suicide prevention.

Sadly though, not much has changed according to him.

“We have seen no change in support around mental health and people are committing suicide every day in South Africa. The situation needs urgent intervention.”

He says discussions regarding mental health and suicide prevention must be made a priority and various mechanisms should be put in place at schools and workplaces to help people understand the conditions associated with mental health.

With the event in the CBD, they wanted to send a message to the government that they are not doing enough to prioritise mental health.

“Mental health is a global health priority and it starts with effective national leadership. The government has many strategic plans in place, but does not get very far in implementing them,” says Kleynhans.

He says there are several community-based organisations such as the Counselling Hub, who charges a minimum of R50 per session. He advises the public to seek help when they suspect or feel like they are developing suicidal thoughts and that they should not take it as a sign of weakness.

“It is a proactive step towards turning your life around,” concludes Kleynhans.