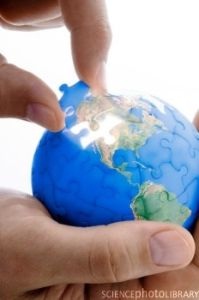 An international team of more than 250 researchers from 20 countries have completed a landmark study of the relationship between genetic variations and mental illness.

Investigators studied more than 50,000 adults and found that common genetic variations contribute to a person’s risk of schizophrenia and bipolar disorder.

Researchers participating in the Psychiatric Genome-Wide Association Study Consortium have published two papers on their findings in the journal Nature Genetics.

The experts say the discovery of these genetic linkages will allow scientists to make major gains toward understanding the causes of these chronic, severe, and debilitating disorders.

The study was unique as researchers examined all or most of the genes of different individuals to see how much the genes vary from individual to individual.

“This is the largest study of its kind by far,” said Patrick F. Sullivan, M.D., a principal investigator in the study.

The study that focused on schizophrenia identified “strong evidence for seven different places in the human genome, five of which were new and two previously implicated, that contain DNA changes that are significantly associated with schizophrenia,” Sullivan said.

And in a joint analysis of a schizophrenia and bipolar disorder sample, the consortium found three different DNA regions, or loci, in which both disorders reached genome-wide statistical significance.

“This tells us that these disorders, which many of us have considered to be separate things, actually share fundamental similarity,” Sullivan said.

“The consortium is the largest research consortium ever in psychiatry and is certainly the largest biological experiment we’ve ever done in the field,” Sullivan said.

“We are studying on the order of 90,000 individuals across multiple disorders, while trying to do something for the greater good, which is effectively to go as far and as deep as we can in understanding the genomics of mental illness.”