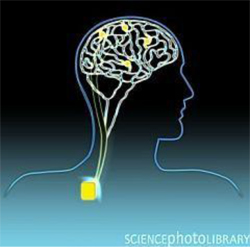 A new study shows that deep brain stimulation (DBS) is a safe and effective intervention for treatment-resistant depression.

The study, led by researchers at Emory University in Atlanta, found that DBS works in patients with either unipolar major depressive disorder or bipolar II disorder.

“Depression is a serious and debilitating medical illness,” says Helen S. Mayberg, MD, a professor in the Departments of Psychiatry and Behavioral Sciences, Neurology and Radiology at Emory University School of Medicine, who led the study.

“When we found that the potential for effective and sustained antidepressant response with DBS for patients with otherwise treatment resistant major depressive disorder was high, the next step was to determine if patients with intractable bipolar depression could also be successfully treated.”

An earlier study by Mayberg done in Toronto in collaboration with scientists at Toronto Western Hospital, University Health Network and Emory, was the first to show such results for patients with treatment-resistant major depressive disorder. Mayberg conducted this new expanded trial at Emory to include patients with bipolar II disorder.

Bipolar spectrum disorder, sometimes referred to as manic-depression, is characterized by bouts of mania or hypomania alternating with episodes of depression. Although people with bipolar II disorder do not have full manic episodes, depressive episodes are frequent and intense, and there is a high risk of suicide, the researchers said.

A major challenge in treating bipolar depression is that many antidepressant medications may cause patients to “switch” into a hypomanic or manic episode, they add.

DBS uses high-frequency electrical stimulation targeted to a specific area of the brain. In the latest study, each of the 17 participants was implanted with two thin wire electrodes, one on each side of the brain. The other end of the wires were connected under the skin of the patient’s neck to a pulse generator implanted in the chest — similar to a pacemaker — that directed the electrical current.

Patients who achieved remission did not experience a spontaneous relapse, the researchers note.

Mayberg and her colleagues are continuing their research, studying demographic, clinical and imaging predictors of response and remission, and introducing psychotherapeutic rehabilitation. Why and how this treatment works is the primary focus of the ongoing research, Mayberg adds.

“Most of these patients have been in a depressed state for many years and are disabled and isolated,” says Dr. Paul E. Holtzheimer, lead psychiatrist on the study and now an associate professor and director of the Mood Disorders Service, Dartmouth Medical School.

“As their depression improves, they need a process to help them achieve full recovery that includes integration back into society. We hope to optimize the rate of improvement for these patients by using a model of care that provides psychotherapeutic rehabilitation built on evidence-based psychotherapy but tailored to the specific individual’s situation.”