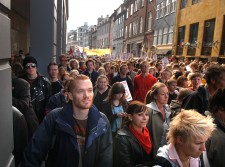 I have anxiety disorder and it all started around the time I broke up with an abusive boyfriend. After the breakup he started to harass me and spread lies about me and pop up at my home having driven 7 hours from his own. It got bad. Really bad. The police became involved. I was scared. All. The. Time. And so I began to have panic attacks in the grocery store. I spent nights at my friends’ apartments when I was too afraid to be on my own.

It was as though I was always on high alert. Checking license plates in my apartment’s parking lot for one that read “Alabama.” Scanning the faces of dark-headed strangers when I was out listening to live music to make sure it wasn’t him. Sometimes the anxiety would creep over me when he wasn’t even in the forefront of my mind. It’s almost like it became a habit to be scared and nervous and panicky.

Even after the harassment abated the anxiety held on and soon my world got much smaller. There was work and there was home. While at home I found it harder and harder to leave.

Agoraphobia became my unwanted friend. Before all the anxiety attacks, before the fear of public spaces and faces, I loved to go out. I loved nothing more than spending a night out in the“Live Music Capital of the World” listening to some kick-ass music. I loved to dance right there, in front of the stage. But as the agoraphobia started to take hold of me, I went out less and less. I would get ready – put on some fresh makeup and a short skirt. I would grab my purse and my lipstick. I would get as far as my apartment’s parking lot where I would stop and mentally argue with myself about whether or not to go to the hot spot of the night, and then I would turn around and go back up to my apartment defeated by my anxiety.

I was put on Xanax and that helped a lot, though now I take other anti-anxiety meds which do the trick. I would take a pill before leaving home and usually that would be enough to quiet the fear. And in time, as I moved around and time passed further and further from that abusive relationship, the anxiety attacks began to lessen.

So what about today? Well, I still deal with agoraphobia sometimes. There are days I don’t want to leave my house. On those days, I challenge myself. Days like today when the world seems like a scary place and my home feels so much more secure, I force myself to brave the world outside my door. I don’t force myself to go shopping or deal with crowds. I am far more gentle with my demands. I head to Starbucks, usually with my two big dogs in the backseat, and go through the drive-thru. Then I come home. It is a small thing, a short trip, but it gets me out of the house with the reward of an ice coffee for doing so. I do this because I don’t want to be that chick who is stuck in her apartment ever again. I don’t want to freak out if I have to go out. I don’t want to let my anxiety win.

And sometimes I’m not strong enough to do it alone. On those days, I ask my boyfriend to take me out somewhere. I’m not talking a crowded movie theater, but maybe again to Starbucks or to Sonic or somewhere that gets me out of the house, but not in contact with too many people. To me, my boyfriend is safe and comfortable and having him with me makes me feel more safe and comfortable. Again, the key is to challenge those feelings of anxiety.

I don’t ever want to experience the intense fear and anxiety I once did on a daily basis. I still live with anxiety disorder, but today, for the most part, it is better. I am able to leave home most days and on the days that I just absolutely can’t, I am again gentle with myself. I know I can’t win every battle and that I can’t be strong every day – but I try.