To view the full article in pdf - click here 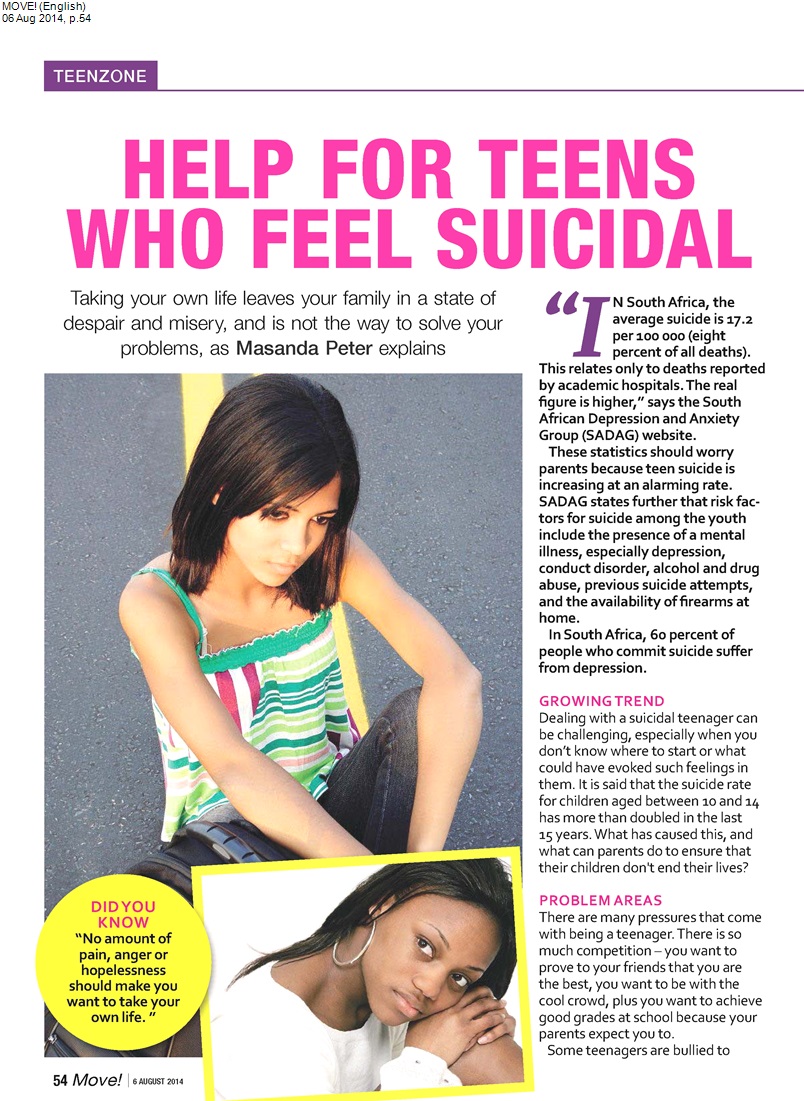 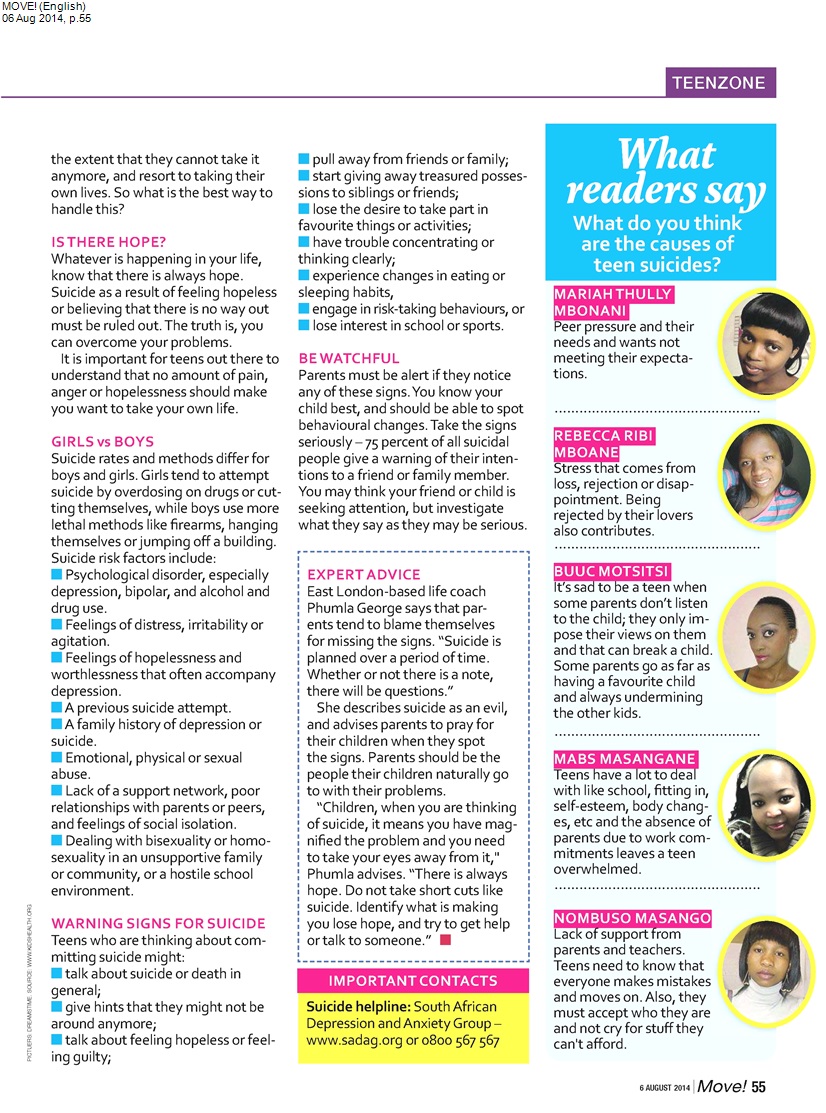 TEENZONE HELP FOR TEENS WHO FEEL SUICIDAL Taking your own life leaves your family in a state of despair and misery, and is not the way to solve your problems, as Masanda Peter explains DID YOU KNOW "No amount of pain, anger or hopelessness should make you want to take your own life." 54 6 AUGUST 2014 N South Africa, the average suicide is 17.2 per loo 000 (eight percent of all deaths). This relates only to deaths reported by academic hospitals. The real figure is higher," says the South African Depression and Anxiety Group (SADAG) website. These statistics should worry parents because teen suicide is increasing at an alarming rate. SADAG states further that risk factors for suicide among the youth include the presence of a mental illness, especially depression, conduct disorder, alcohol and drug abuse, previous suicide attempts, and the availability of firearms at home. In South Africa, 6o percent of people who commit suicide suffer from depression. GROWING TREND Dealing with a suicidal teenager can be challenging, especially when you don't know where to start or what could have evoked such feelings in them. It is said that the suicide rate for children aged between ao and 14 has more than doubled in the last 15 years. What has caused this, and what can parents do to ensure that their children don't end their lives? PROBLEM AREAS There are many pressures that come with being a teenager. There is so much competition — you want to prove to your friends that you are the best, you want to be with the cool crowd, plus you want to achieve good grades at school because your parents expect you to. Some teenagers are bullied to the extent that they cannot take it anymore, and resort to taking their own lives. So what is the best way to handle this? IS THERE HOPE? Whatever is happening in your life, know that there is always hope. Suicide as a result of feeling hopeless or believing that there is no way out must be ruled out. The truth is, you can overcome your problems. It is important for teens out there to understand that no amount of pain, anger or hopelessness should make you want to take your own life. GIRLS vs BOYS Suicide rates and methods differ for boys and girls. Girls tend to attempt suicide by overdosing on drugs or cutting themselves, while boys use more lethal methods like firearms, hanging themselves or jumping off a building. Suicide risk factors include: Psychological disorder, especially depression, bipolar, and alcohol and drug use. Feelings of distress, irritability or agitation. Feelings of hopelessness and worthlessness that often accompany depression. A previous suicide attempt. A family history of depression or suicide. Emotional, physical or sexual abuse. Lack of a support network, poor relationships with parents or peers, and feelings of social isolation. Dealing with bisexuality or homosexuality in an unsupportive family or community, or a hostile school environment. WARNING SIGNS FOR SUICIDE Teens who are thinking about committing suicide might: talk about suicide or death in general; give hints that they might not be around anymore; talk about feeling hopeless or feeling guilty; pull away from friends or family; start giving away treasured possessions to siblings or friends; lose the desire to take part in favourite things or activities; have trouble concentrating or thinking clearly; experience changes in eating or sleeping habits, engage in risk-taking behaviours, or lose interest in school or sports. BE WATCHFUL Parents must be alert if they notice any of these signs.You know your child best, and should be able to spot behavioural changes. Take the signs seriously — 75 percent of all suicidal people give a warning of their intentions to a friend or family member. You may think your friend or child is seeking attention, but investigate what they say as they may be serious. EXPERT ADVICE East London-based life coach Phumla George says that parents tend to blame themselves for missing the signs. "Suicide is planned over a period of time. Whether or not there is a note, there will be questions." She describes suicide as an evil, and advises parents to pray for their children when they spot the signs. Parents should be the people their children naturally go to with their problems. "Children, when you are thinking of suicide, it means you have magnified the problem and you need to take your eyes away from it, Phumla advises. "There is always hope. Do not take short cuts like suicide. Identify what is making you lose hope, and try to get help or talk to someone." IMPORTANT CONTACTS Suicide helpline: South African Depression and Anxiety Group — www.sadag.org or o800 567 567 What readers say What do you think are the causes of teen suicides? Peer pressure and their needs and wants not meeting their expectations. BUUC MOTSITSI It's sad to be a teen when some parents don't listen to the child; they only impose their views on them and that can break a child. Some parents go as far as having a favourite child and always undermining the other kids. MABS MASANGANE Teens have a lot to deal with like school, fitting in, self-esteem, body changes, etc and the absence of parents due to work commitments leaves a teen overwhelmed. NOMBUSO MASANGO Lack of support from parents and teachers. Teens need to know that everyone makes mistakes and moves on. Also, they must accept who they are and not cry for stuff they can't afford. MARIAH THULLY MBONANI REBECCA RIBI MBOANE Stress that comes from loss, rejection or disappointment. Being rejected by their lovers also contributes.