It’s Not Just What You Say, It’s How You Say It
A smartphone app listens for signs of manic and depressive episodes. 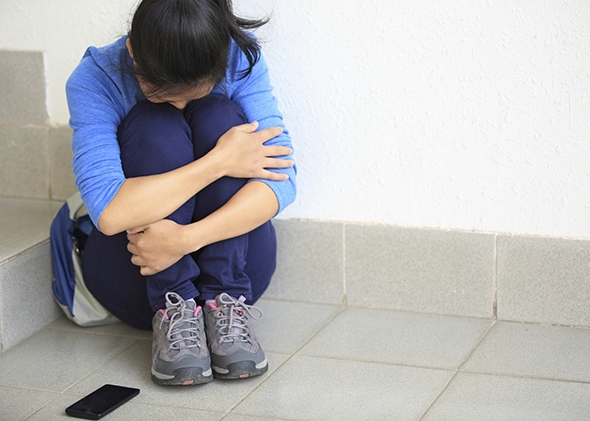 Even the savviest city dwellers would be lost in a maze of detours and one-way streets without navigation apps. But what about GPS for your mental health—technology that could navigate the peaks and valleys of bipolar disorder? Yep, there’s an app for that, too.

Almost 30 million people worldwide are estimated to be living with bipolar disorder, a serious mental illness marked by flights of euphoric mania and deep dives into depression. Though drugs that regulate mood allow people with bipolar disorder to live normal lives, relapses are common.

That’s where a new smartphone app comes in. PRIORI monitors the subtleties of voice quality and other acoustics to detect the dramatic mood swings that characterize bipolar disorder. The hope is to anticipate swings before they happen so that it may be possible to intervene before the situation deteriorates.

Suicide is the No. 1 cause of premature death among people with bipolar disorder, and more than 6 percent of patients end up taking their own lives.

Melvin McInnis, a psychiatrist at University of Michigan who developed the app in collaboration with computer scientists at the school’s College of Engineering, says PRIORI was inspired by bipolar people’s loved ones, who often were first to detect an imminent mood swing during routine conversations.

“A mother will call and say, ‘Something’s wrong. I can hear it in my son’s voice.’ And, more often than not, she’s right,” he says. “We wondered if we could train a computer to identify small shifts and changes in the vocal and acoustic patterns in that quality of voice that would predict an imminent manic or depressive episode.”

Doctors routinely look for certain speech characteristics to assess the moods of bipolar patients. Those heading toward a manic episode may speak louder or faster than usual, and may jump from topic to topic. Data from one recent study, on the other hand, showed that depressed patients have longer speech pause times. These pauses tend to shorten as patients are treated with antidepressants and their depression lifts. Another study showed differences in pitch and jitter in different mood states among patients with bipolar disorder.

PRIORI would identify these red flags of an impending episode and signal the patient or her clinician. That way, a bipolar person might recognize the need to get help before things spiral out of control.

Such red flags are particularly important for a bipolar patient heading toward a manic episode, McInnis says, because once a manic episode has begun, the patient often becomes unreceptive to recommendations to seek medical care.

“They go from feeling absolutely phenomenal with lots of energy and enthusiasm to making reckless, out-of-control choices and engaging in high-risk, often dangerous activities that compromise their health and well-being,” he says.

Some existing apps monitor bipolar disorder. However, they require active data input by the user, such as daily logs of symptoms, activity, and sleep habits. PRIORI, on the other hand, is run in the background of the phone to continually monitor the disorder. The app’s lack of intrusiveness is especially key to avoid alarming patients who may already have paranoid tendencies, especially during manic phases.

Once PRIORI is installed on a smartphone, it records all calls placed or received. (To address confidentiality concerns, only the patient’s side of everyday phone calls are recorded, and the information is stored in secure servers that comply with patient privacy laws.) The app then encrypts and sends the audio recordings to an engineering lab at the University of Michigan, where a machine-learning program analyzes the sounds and silences of the user—not the content of the conversation—to monitor his or her mental health.

So far PRIORI has been piloted in a small study of six people with rapid-cycling bipolar disorder, which is characterized by four or more depressive or manic episodes during a 12-month period. In the preliminary phase, the app has been successful in detecting impending mood swings about 65 percent of time, a figure researchers expect to boost as the app is trained on a larger number of audio recordings.

A larger study is now underway to test PRIORI in 50 people with bipolar disorder, as well as 10 people without the disorder, to better detect both manic and depressive episodes. If further testing confirms its usefulness, McInnis says the app could signal a major improvement over traditional approaches of monitoring bipolar disorder, particularly in regions of the world with scant mental health services.

“The classic way we have of monitoring individuals with bipolar disorder is what I call 18th-century medicine. People see their doctors, chat how their energy levels are during the day, how they’re sleeping at night, how they’re getting along at home and work to gauge how they’re going,” says McInnis. “[W]e diagnose an episode when it’s already started, and it’s already causing all kinds of problems.”

McInnis says the same approach could be used to monitor other mental health conditions that cause changes in a person’s voice, such as schizophrenia and post-traumatic stress disorder. It could also be used with diseases that affect the respiratory system, such as asthma or congestive heart failure; or the central nervous system, like Huntington’s, amyotrophic lateral sclerosis (Lou Gehrig’s disease), or Parkinson’s.

Indeed, a research initiative headed up by mathematician Max Little, a Wellcome Trust/MIT fellow at the MIT Media Lab, has already proved it possible to diagnosis Parkinson’s disease through 10-second phone-based voice recordings with 98.6 percent accuracy. Now Little aims to perfect an algorithm capable of tracking progression of the notoriously difficult-to-monitor disease through voice recordings made on either landline telephones or mobile devices.

The algorithm, developed in partnership with the online community PatientsLikeMe and the nonprofit research organization Sage Bionetworks, will detect specific variations in voice quality, such as tremors, breathlessness, and vocal weakness. These characteristics have been shown to correlate with the disease’s motor impairments, including resting tremor, rigidity, the appearance of an awkward or freezing gait, and a general reduction of spontaneous movement.

“Detecting vocal qualities that accompany or often proceed the onset of the disease’s disabling physical symptoms may make it possible to intervene earlier on in the degenerative process,” Little says.

Parkinson’s disease is currently monitored through office visits, which often fail to reflect how a person’s disease is behaving in real time. If successful, Little hopes that his voice software could supplement or even replace the need for physician office visits by providing a continuous and remote means of monitoring how Parkinson’s is progressing.

“Imagine the power to significantly improve health with a technology as ubiquitous as the telephone,” he says.

That is, of course, if people talk to one another. Data usage on mobile phones has long since surpassed voice use—so maybe future versions of the app could search for clues in text messaging patterns.

This article is part of Future Tense, a collaboration among Arizona State University, the New America Foundation, and Slate. Future Tense explores the ways emerging technologies affect society, policy, and culture. To read more, visit the Future Tense blog and the Future Tense home page. You can also follow us on Twitter.

Aimee Swartz is based in Washington, D.C. She has written for the Washington Post, The Atlantic, The Scientist, and O magazine.