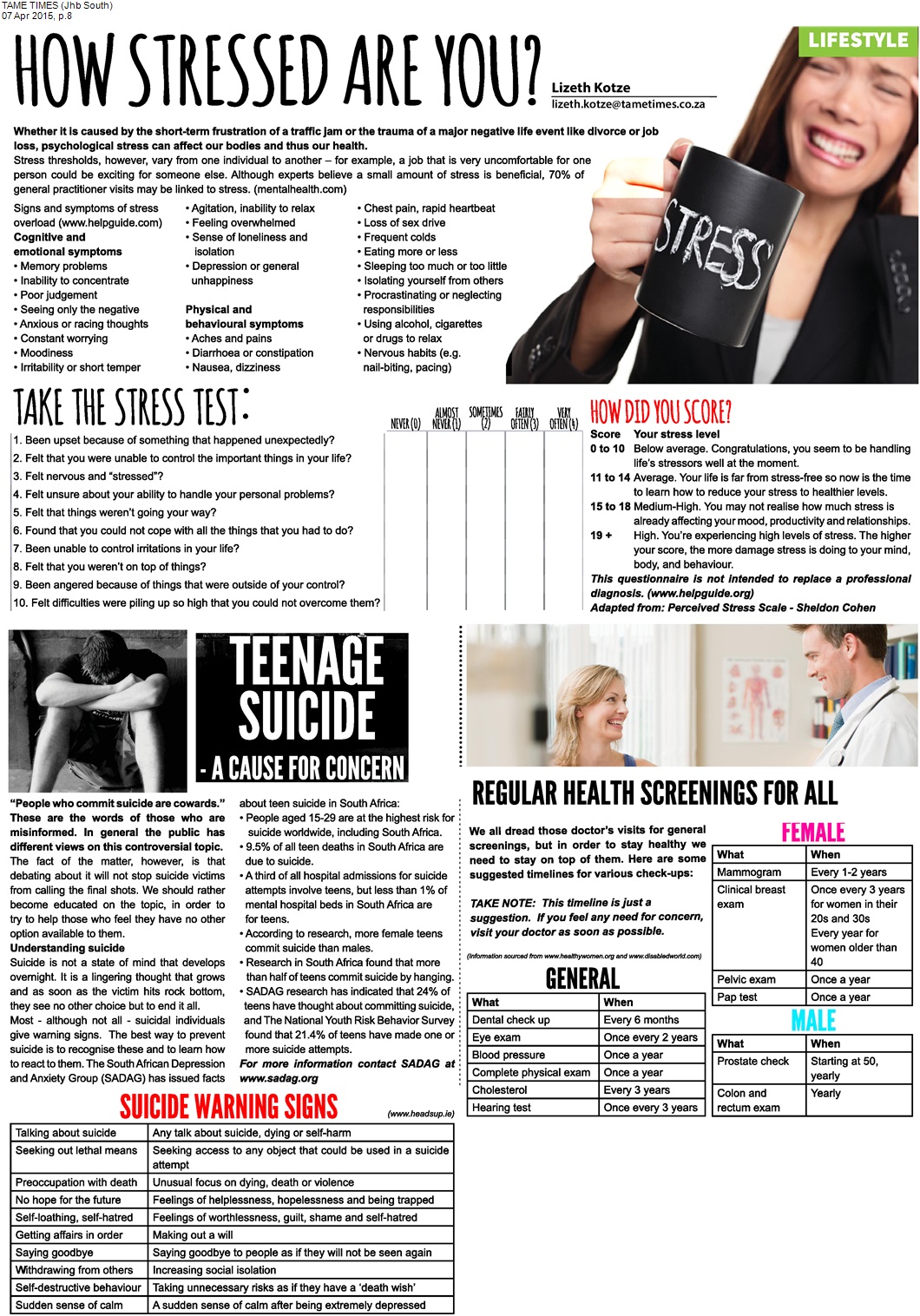 Whether it is caused by the short-term frustration of a traffic jam or the trauma of a major negative life event like divorce or job loss, psychological stress can affect our bodies and thus our health. Stress thresholds, however, vary from one individual to another — for example, a job that is very uncomfortable for one person could be exciting for someone else. Although experts believe a small amount of stress is beneficial, 70% of general practitioner visits may be linked to stress. (mentalhealth.com) Signs and symptoms of stress overload (www.helpguide.com) Cognitive and emotional symptoms Memory problems Inability to concentrate Poor judgement Seeing only the negative Anxious or racing thoughts Constant worrying Moodiness Irritability or short temper Agitation, inability to relax Feeling overwhelmed Sense of loneliness and isolation Depression or general unhappiness Physical and behavioural symptoms Aches and pains Diarrhoea or constipation Nausea, dizziness Chest pain, rapid heartbeat Loss of sex drive Frequent colds Eating more or less Sleeping too much or too little Isolating yourself from others Procrastinating or neglecting responsibilities Using alcohol, cigarettes or drugs to relax Nervous habits (e.g. nail-biting, pacing) TAKE Tli STRESS TEST: Been upset because of something that happened unexpectedly? Felt that you were unable to control the important things in your life? Felt nervous and "stressed"? Felt unsure about your ability to handle your personal problems? Felt that things weren't going your way? Found that you could not cope with all the things that you had to do? Been unable to control irritations in your life? Felt that you weren't on top of things? Been angered because of things that were outside of your control? Felt difficulties were piling up so high that you could not overcome them? TEENAGE SUICIDE - A CAUSE FOR CONCERN "People who commit suicide are cowards." These are the words of those who are misinformed. In general the public has different views on this controversial topic. The fact of the matter, however, is that debating about it will not stop suicide victims from calling the final shots. We should rather become educated on the topic, in order to try to help those who feel they have no other option available to them. Understanding suicide Suicide is not a state of mind that develops overnight. It is a lingering thought that grows and as soon as the victim hits rock bottom, they see no other choice but to end it all. Most - although not all - suicidal individuals give warning signs. The best way to prevent suicide is to recognise these and to Team how to react to them. The South African Depression and Anxiety Group (SADAG) has issued facts about teen suicide in South Africa: People aged 15-29 are at the highest risk for suicide worldwide, including South Africa. 9.5% of all teen deaths in South Africa are due to suicide. A third of all hospital admissions for suicide attempts involve teens, but less than 1 % of mental hospital beds in South Africa are for teens. According to research, more female teens commit suicide than males. Research in South Africa found that more than half of teens commit suicide by hanging. SADAG research has indicated that 24% of teens have thought about committing suicide, and The National Youth Risk Behavior Survey found that 21.4% of teens have made one or more suicide attempts. For more information contact SADAG at www.sadag.org HOW STRESSED ARE YO ALMOST SOM TIMES fAIR1 VERT NEVER (0) NEVER(1) 2 OHEN 3 (RN it HOW DID YOU SCORE Score Your stress level 0 to 10 Below average. Congratulations, you seem to be handling life's stressors well at the moment. 11 to 14 Average. Your life is far from stress-free so now is the time to learn how to reduce your stress to healthier levels. 15 to 18 Medium-High. You may not realise how much stress is already affecting your mood, productivity and relationships. 19+ High. You're experiencing high levels of stress. The higher your score, the more damage stress is doing to your mind, body, and behaviour. This questionnaire is not intended to replace a professional diagnosis. (www.heipguide.org) Adapted from: Perceived Stress Scale - Sheldon Cohen REGULAR HEALTH SCREENINGS FOR ALL We all dread those doctor's visits for general screenings, but in order to stay healthy we need to stay on top of them. Here are some suggested timelines for various check-ups: TAKE NOTE: This timeline is just a suggestion. If you feel any need for concern, visit your doctor as soon as possible. (In/ormadon sourced from www.healthywomen.org and www.disabledworid.com) GENERAL