Video Game Is Built to Be Prescribed to Children With A.D.H.D. 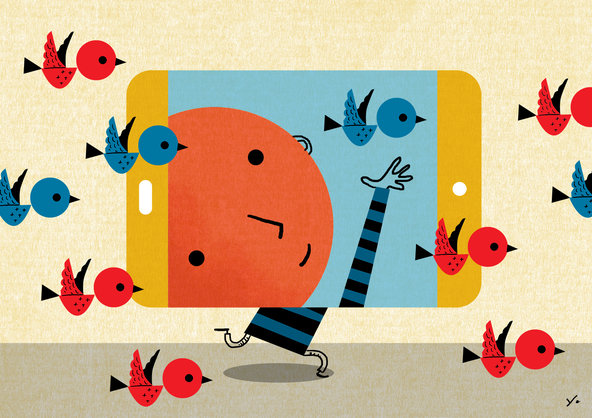 Send an avatar surfing down an icy river by tilting your computer tablet from side to side. Grab bluebirds (but not red birds) each time they appear on your screen by tapping your thumb on the surface. Zoom over flashing power stations, but steer clear of the riverbanks.

These are the challenges of Project: EVO, a computer program created to improve attention and reduce impulsivity in children with attention deficit hyperactivity disorder. Its creators plan to conduct a large clinical trial of the product early next year. After that, they intend to seek Food and Drug Administration approval for physicians to prescribe it to treat A.D.H.D., much as they do medications.

“We want this to be a mainstream option in any doctor’s office, right next to Adderall,” said Eddie Martucci, the chief executive and a co-founder of Akili Interactive Labs, which makes Project: EVO.

Many parents worry that fast-paced video games are actually aggravating their children’s A.D.H.D, and in fact, some research suggests that attention problems may increase with the number of hours spent in front of computer and television screens. But proponents of so-called brain-training programs marketed to combat A.D.H.D., including Cogmed, Activate and several others, argue that research increasingly shows that with the right sorts of challenges and rewards, limited sessions of game-playing can actually help.

A pilot study of Project: EVO, the results of which were released in late October at the 62nd annual conference of the American Academy of Child and Adolescent Psychiatry, found that children with A.D.H.D. who played the game for half an hour a day, five times a week for four weeks, significantly improved on several tests of attention. The study involved 80 children, half of whom had a diagnosis of A.D.H.D. The researchers found no significant improvements in the children without A.D.H.D.

Project: EVO’s name is a nod to the game’s goal of helping players’ brains “evolve” to a higher level of performance. It is the creation of a team including Adam Gazzaley, a neuroscientist at the University of California, San Francisco, and is modeled on NeuroRacer, an earlier invention that he and his colleagues created to improve cognitive skills in old age. A study published in the journal Nature found that playing the game helped aging adults improve their focus and ability to multitask.

Despite the video game maker’s optimism, experts urge caution. “Given what we know so far, a healthy dose of skepticism is warranted,” said Russell Barkley, a clinical professor of psychiatry at the Medical University of South Carolina and the author of several books on A.D.H.D. Dr. Barkley said that research indicated that while playing the games may help children become better at playing the games, it is less likely that the benefits would transfer to improvements in schoolwork or behavior at home.

A 2013 analysis of 25 studies on brain-training programs for A.D.H.D. said the training had a “nonsignificant or negligible” effect on academic functioning. More recently, the Federal Trade Commission has been cracking down on claims made by the brain training industry, which earns an estimated $1.3 billion a year.

“Companies must back up their brain-training claims with reliable science,” Jessica Rich, the commission’s director of the Bureau of Consumer Protection, said earlier this year.

Founders of Akili and of C8 Sciences, which makes Activate, contend that they are doing just that, with a new generation of more sophisticated and effective products.

“We train a suite of functions simultaneously, including response-inhibition, cognitive flexibility and resisting distractions, and our secret sauce is the way the program individualizes itself for each child, becoming more challenging as the child progresses,” said Dr. Bruce E. Wexler, a professor emeritus of psychiatry at the Yale School of Medicine and a co-founder of C8 Sciences. Like Akili, C8 Sciences intends to seek approval from the Food and Drug Administration for its product. It is already selling subscriptions for the software to parents — at $195 for three months — promising “improvements in your child’s ability to concentrate, complete tasks and follow directions.”

Additionally, some 200 schools in the United States have purchased the Activate program, which comes with a plan of cognitively demanding exercises, such as tai chi and dance, and are using it for children with and without A.D.H.D., Dr. Wexler said. He calls the venture “a school lunch program for the brain.”

In still unpublished research funded by the National Institutes of Health, Dr. Wexler said he had observed 66 children found to have A.D.H.D. or to be at high risk for it who participated in 30 minutes of Activate computer exercises and 40 minutes of physical exercises three or four times a week for 16 weeks. He said parents of his participants were twice as likely to report at least 30 percent reductions of symptoms in their children as were parents in groups that had not played the games, an effect he said was on par with that of taking A.D.H.D. medication.

The operating theory behind the brain training industry is that people can improve cognitive functions through repetitive, progressively difficult exercises, just like improving muscle tone at the gym. That is particularly appealing for many parents who worry about potential side effects of stimulant medications such as amphetamine and methylphenidate, the most common treatments for A.D.H.D.

Pharmaceutical firms are paying attention. Shire, , which manufactures Adderall, was an early investor in Akili and helped design the recent pilot study.

Katherine Ellison is a co-author of “ADHD: What Everyone Needs to Know” (Oxford University Press, November 2015)