Here are some questions and answers about the degenerative disease 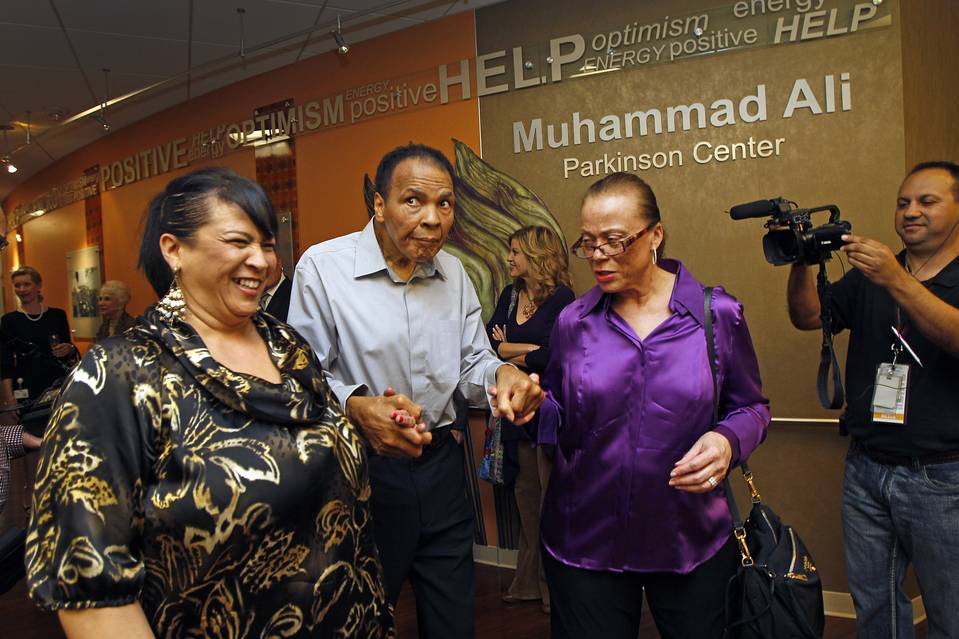 Muhammad Ali, center, with the support of his sister-in-law Marilyn Williams, left, and wife Lonnie walked through a Parkinson center named after him at St. Joseph's Hospital and Medical Center in Phoenix in February 2012. The center was started in 1997. PHOTO:ASSOCIATED PRESS
Associated Press

Muhammad Ali has died after living with Parkinson’s, a degenerative neurological disease, for three decades. Here are some questions and answers about Parkinson’s disease.

Q: What is Parkinson’s?
A: Parkinson’s is a neurological disease that robs people of control over their movements. It typically starts with tremors and is characterized by slow movement, a shuffling gait, stiff limbs, balance problems and slurred speech.

Q: Who gets it?
A: About 1 million Americans are living with Parkinson’s, and an estimated 4 million to 5 million people world-wide, according to the National Parkinson Foundation. It usually appears after age 60, although sometimes it can develop before age 40.

Q: What causes it?
A: The exact cause isn’t known, but Parkinson’s develops when cells that produce one of the brain’s chemical messengers, called dopamine, begin to deteriorate and die. Dopamine transports signals to parts of the brain that control movement. Parkinson’s symptoms appear after enough dopamine-producing cells die, leaving too little of this neurotransmitter in the brain.

Q: Is there a cure?
A: There is no cure but there are a range of treatments, from medications that affect dopamine levels to a surgically implanted tremor-blocking device. Patients also can benefit from physical and occupational therapy.

Q: What’s the prognosis?
A: Symptoms worsen over time, usually slowly. The severity of symptoms, and how quickly they progress, varies widely between patients. In advanced cases, people may be unable to walk or care for themselves. They also can suffer non-motor symptoms, including depression and memory and other cognitive dysfunction.
While Parkinson’s itself isn’t considered fatal, people can die from complications of the disease.

Q: What complications are of most concern?
A: Lung problems are a risk as muscle weakness impedes the ability to cough and to swallow. While any kind of pneumonia can occur, what’s called aspiration pneumonia—when bits of food or liquid land in the lungs instead of being swallowed properly—is the leading cause of death among Parkinson’s patients, said National Parkinson Foundation medical director Dr. Michael S. Okun.