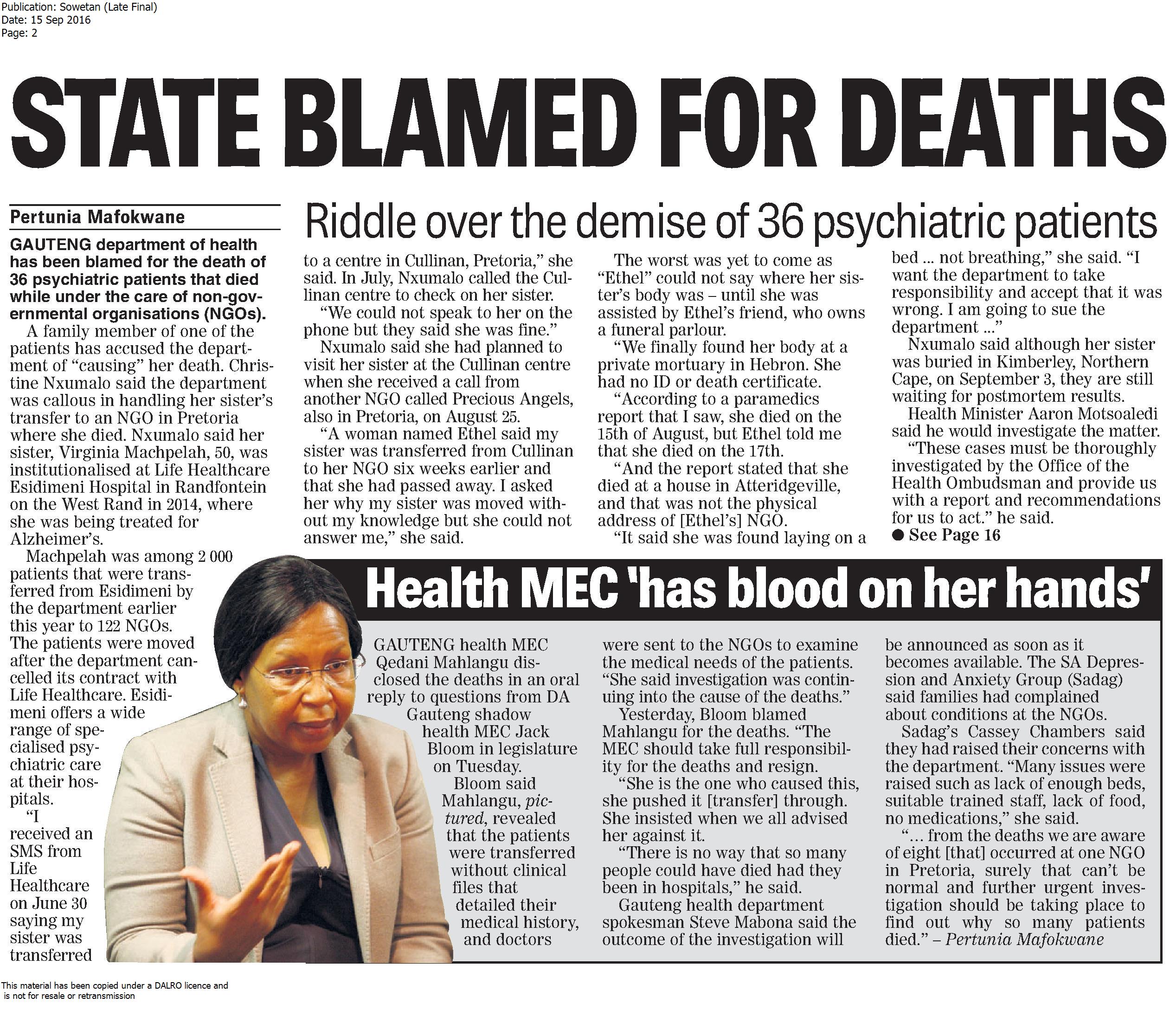 Riddle over the demise of 36 psychiatric patients GAUTENG department of health has been blamed for the death of 36 psychiatric patients that died while under the care of nongovernmental organisations (NG05). A family member of one of the patients has accused the department of "causing" her death. Christine Nxumalo said the department was callous in handling her sister's transfer to an NGO in Pretoria where she died. Nxumalo said her sister, Virginia Machpelah, 50, was institutionalised at Life Healthcare Esidimeni Hospital in Randfontein on the West Rand in 2014, where she was being treated for Alzheimer's. Machpelah was among 2 000 patients that were transferred from Esidimeni by the department earlier this year to 122 NGOs. The patients were moved after the department cancelled its contract with Life Healthcare. Esidimeni offers a wide range of specialised psychiatric care at their hospitals. "I received an SMS from Life Healthcare on June 30 saying my sister was transferred to a centre in Cullinan, Pretoria," she said. In July, Nxumalo called the Cullinan centre to check on her sister. "We could not speak to her on the phone but they said she was fine." Nxumalo said she had planned to visit her sister at the Cullinan centre when she received a call from another NGO called Precious Angels, also in Pretoria, on August 25. "A woman named Ethel said my sister was transferred from Cullinan to her NGO six weeks earlier and that she had passed away. I asked her why my sister was moved without my knowledge but she could not answer me," she said. The worst was yet to.come as "Ethel" could not say where her sister's body was until she was assisted by Ethel's friend, who owns a funeral parlour. "We finally found her body at a private mortuary in Hebron. She had no ID or death certificate. "According to a paramedics report that I saw, she died on the 15th of August, but Ethel told me that she died on the 17th. "And the report stated that she died at a house in Atteridgeville, and that was not the physical address of [Ethel's] NGO. "It said she was found laying on a bed ... not breathing," she said. "I want the department to take responsibility and accept that it was wrong. I am going to sue the department ..." Nxumalo said although her sister was buried in Kimberley, Northern Cape, on September 3, they are still waiting for postmortem results. Health Minister Aaron Motsoaledi said he would investigate the matter. "These cases must be thoroughly investigated by the Office of the Health Ombudsman and provide us with a report and recommendations for us to act." he said. See Page 16 GAUTENG health MEC Qedani Mahlangu disclosed the deaths in an oral reply to questions from DA Gauteng shadow health MEC Jack Bloom in legislature on Tuesday. Bloom said Mahlangu, pictured, revealed that the patients were transferred without clinical files that detailed their medical history, and doctors were sent to the NGOs to examine the medical needs of the patients. "She said investigation was continuing into the cause of the deaths." Yesterday, Bloom blamed Mahlangu for the deaths. "The MEC should take full responsibility for the deaths and resign. "She is the one who caused this, she pushed it [transfer] through. She insisted when we all advised her against it. "There is no way that so many people could have died had they been in hospitals," he said. Gauteng health department spokesman Steve Mabona said the outcome of the investigation will STATE BLAMED FOR DEATHS Pertunia Mafokwane fr ION be announced as soon as it becomes available. The SA Depression and Anxiety Group (Sadag) said families had.complained about conditions at the NGOs. Sadag's Cassey Chambers said they had raised their concerns with the department. "Many issues were raised such as lack of enough beds, suitable trained staff, lack of food, no medications," she said. "... from the deaths we are aware of eight [that] occurred at one NGO in Pretoria, surely that can't be normal and further urgent investigation should be taking place to find out why so many patients died." Pertunia Mafokwane

Heads must roll over deaths of mental patients

THIRTYSIX people, supposedly protected by their rights under our constitution, have, it appears, needlessly died. The cause of the deaths of the Gauteng psychiatric patients while in the care of nongovernment organisations should be investigated and those found to have slacked in their duty must be exposed and dismissed. The deaths cannot be treated as just one of those mistakes that will be explained and soon forgotten. The MEC for health in the province, Qedani Mahlangu, should not stop with an investigation into the deaths of patients — we demand that heads roll. It is troubling to note that Mahlangu and her health department were warned about what might .. iviahlangu happen if proper planning and care were not warned exercised when the patients were moved, about what Mahlangu must explain to the public why a might contract with Life Healthcare, which looked happen after about 2 000 patients, was cancelled. Was enough done to ensure that the private facilities chosen to take over care of the patients had the capacity to do so? We fully support the call by the SA Depression and Anxiety Group for a thorough investigation to establish the cause of the deaths of the patients. The group's claims that the patients died not from chronic illness but from pathologies that need not have arisen are particularly troubling. Mahlangu should take responsibility and assist and reimburse bereaved families for their loss. If the cancellation of the contract with Life Healthcare was for valid reasons, we should be told what they were. We will not stop asking difficult questions of Mahlangu and her team until we have the truth. If the death in such circumstances of 36 people goes without challenge we will be failing as a nation and disregarding the constitution. The timeo Heads must roll over deaths of mental patients

Outcry over the deaths of 36 psychiatric patients 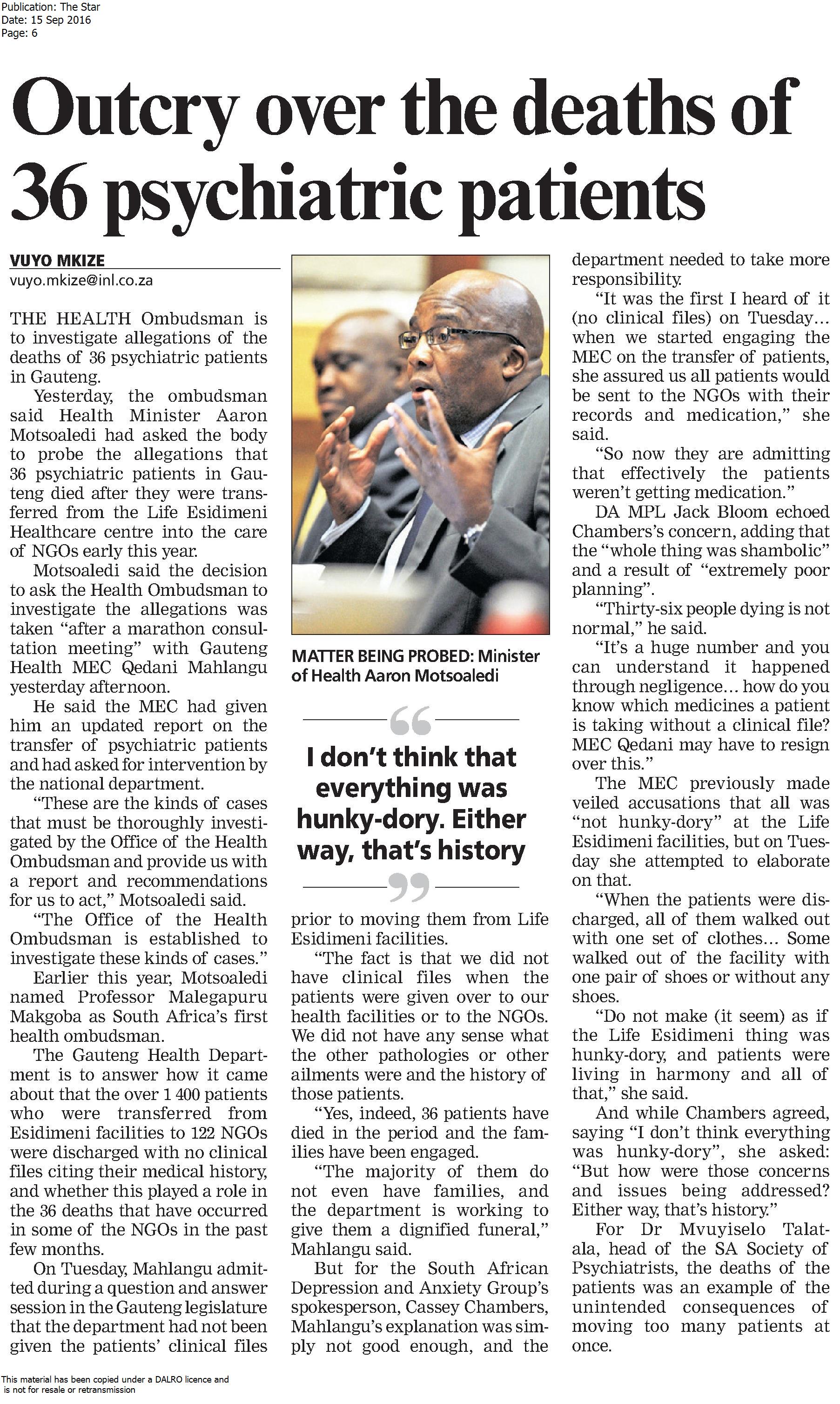 THE HEALTH Ombudsman is to investigate allegations of the deaths of 36 psychiatric patients in Gauteng. Yesterday, the ombudsman said Health Minister Aaron Motsoaledi had asked the body to probe the allegations that 36 psychiatric patients in Gauteng died after they were transferred from the Life Esidimeni Healthcare centre into the care of NGOs early this year. Motsoaledi said the decision to ask the Health Ombudsman to investigate the allegations was taken "after a marathon consultation meeting" with Gauteng Health MEC Qedani Mahlangu yesterday afternoon. He said the MEC had given him an updated report on the transfer of psychiatric patients and had asked for intervention by the national department. "These are the kinds of cases that must be thoroughly investigated by the Office of the Health Ombudsman and provide us with a report and recommendations for us to act," Motsoaledi said. "The Office of the Health Ombudsman is established to investigate these kinds of cases." Earlier this year, Motsoaledi named Professor Malegapuru Makgoba as South Africa's first health ombudsman. The Gauteng Health Department is to answer how it came about that the over 1 400 patients who were transferred from Esidimeni facilities to 122 NGOs were discharged with no clinical files citing their medical history, and whether this played a role in the 36 deaths that have occurred in some of the NGOs in the past few months. On Tuesday, Mahlangu admitted during a question and answer session in the Gauteng legislature that the department had not been given the patients' clinical files prior to moving them from Life Esidimeni facilities. "The fact is that we did not have clinical files when the patients were given over to our health facilities or to the NGOs. We did not have any sense what the other pathologies or other ailments were and the history of those patients. "Yes, indeed, 36 patients have died in the period and the families have been engaged. "The majority of them do not even have families, and the department is working to give them a dignified funeral," Mahlangu said. But for the South African Depression and Anxiety Group's spokesperson, Cassey Chambers, Mahlangu's explanation was simply not good enough, and the department needed to take more responsibility "It was the first I heard of it (no clinical files) on Tuesday... when we started engaging the MEC on the transfer of patients, she assured us all patients would be sent to the NGOs with their records and medication," she said. "So now they are admitting that effectively the patients weren't getting medication." DA MPL Jack Bloom echoed Chambers's concern, adding that the "whole thing was shambolic" and a result of "extremely poor planning". "Thirtysix people dying is not normal," he said. "It's a huge number and you can understand it happened through negligence.., how do you know which medicines a patient is taking without a clinical file? MEC Qedani may have to resign over this." The MEC previously made veiled accusations that all was "not hunkydory" at the Life Esidimeni facilities, but on Tuesday she attempted to elaborate on that. "When the patients were discharged, all of them walked out with one set of clothes... Some walked out of the facility with one pair of shoes or without any shoes. "Do not make (it seem) as if the Life Esidimeni thing was hunkydory, and patients were living in harmony and all of that," she said. And while Chambers agreed, saying "I don't think everything was hunkydory", she asked: "But how were those concerns and issues being addressed? Either way, that's history" For Dr Mvuyiselo Talatala, head of the SA Society of Psychiatrists, the deaths of the patients was an example of the unintended consequences of moving too many patients at once. I don't think that everything was hunkydory. Either way, that's history Outcry over the deaths of 36 psychiatric patients VUYO MKIZE This email address is being protected from spambots. You need JavaScript enabled to view it. MATTER BEING PROBED: Minister of Health Aaron Motsoaledi