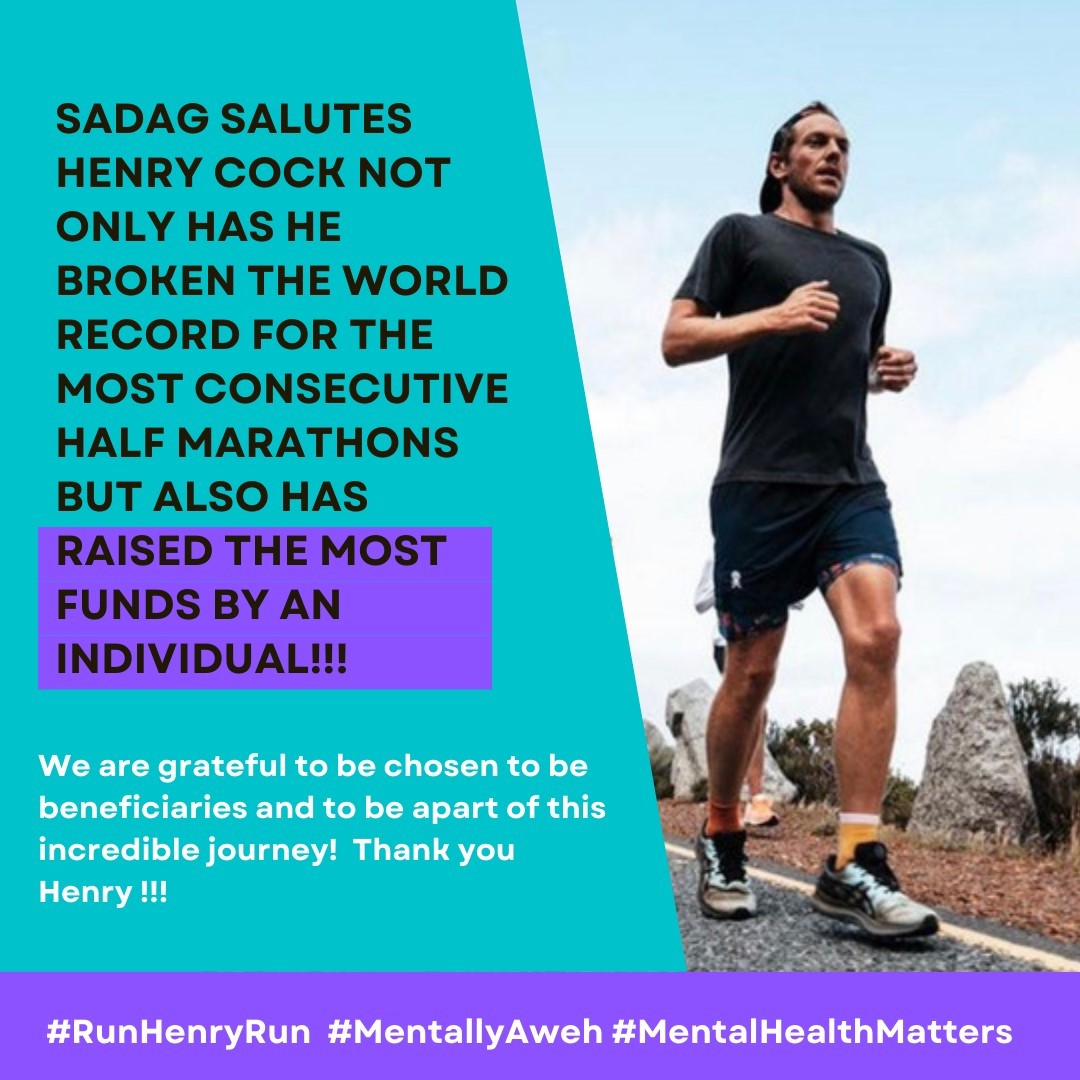 On 18 November 2021 a new record holder was documented by South African, Henry Cock. Reaching the milestone of 133 consecutive half marathons run by an individual means that Henry officially broke the World Record. Henry ran his last half marathon in the upper west coast of South Africa in the town of Alexander Bay. To date, Henry has raised over R1million for SADAG!

Henry Cock may be a familiar name to many as he set out on his initiative ’Mentally Aweh’ on 8 July 2021 across South Africa passing all the coastal towns from the upper east coast to the west coast.

Throughout his epic journey from KwaZulu-Natal to Northern Cape, Henry has been an ambassador for Mental Health Awehness. He has become a beacon of hope and an inspiration for many throughout the country. “My run is a test of both mental and physical endurance. It has taken every ounce of strength I've got. But in many ways, it’s easier for me to do than it is for some people to face another day,” says Henry.

His aim was to raise mental health awareness and raise funds for the South African Depression and Anxiety Group (SADAG) while he ran 21km daily to break the World Record 133 consecutive half marathons. “The goal is to let people know it’s okay to talk about Depression, Anxiety, and anything that affects your mental health”, Henry says. “Each day I ran, every interview and article I have done and every person I spoke to on this journey, was a step to the goal of raising much needed Mental Health Awareness and funds for SADAG.”

SADAG runs over 30 telephonic counselling helplines which are open 24 hours a day, 7 days a week, 365 days a year and are manned by over 200 volunteers. With thousands of people depressed, stressed, anxious and lonely, SADAG has been busier than ever, receiving up to 2,200 calls a day. They have 160 mental health support groups nationally and have two Counselling Containers offering free services to the communities of Diepsloot, Ivory Park and its surrounds.

Founder and Director of SADAG, Zane Wilson says “I would like to congratulate Henry on his great achievement. I applaud Henry for his selflessness and sacrifice that he has made to this initiative. His commitment to raise awareness about mental health and raising funds for the organisation is inspiring. We are so grateful as all donations will help us continue our work.”

For more information or queries please contact Fatima Seedat This email address is being protected from spambots. You need JavaScript enabled to view it.