Ritalin and the Hyperactive Child 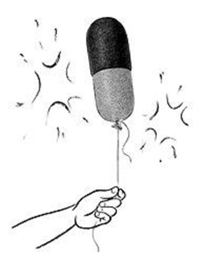 I am grateful to Dr. Sroufe for calling attention to the lack of evidence for long-term benefit from medication for attention deficit hyperactivity disorder. But his dichotomy between the “brain” and the “environment” is outdated and no longer relevant given the explosion of knowledge coming from the discipline of behavioral epigenetics.

We now have extensive evidence of the complex interplay between genetic vulnerability and environment in determining the outcome for any one individual. This distinction has important therapeutic implications.

Parents may struggle terribly in the face of a biologically dysregulated child. To help parents be attuned to a child in a way that promotes healthy development, it is essential that we empathize with their experience. In such a supportive environment, parents, not drugs, can help grow a healthy brain.

The writer is a pediatrician and the author of “Keeping Your Child in Mind: Overcoming Defiance, Tantrums and Other Everyday Behavior Problems by Seeing the World Through Your Child’s Eyes.”

Ritalin virtually saved my child’s life. L. Alan Sroufe may have been “studying children” the way botanists study plants, but I have been raising one.

My son’s attention deficit hyperactivity disorder made it impossible for him to play with other children without often becoming violent with frustration. The disorder affects more than concentration. As explained to us when our son received the diagnosis from an outstanding child psychiatrist, A.D.H.D. used to be called “minimal brain dysfunction.” It often mimics mild traumatic brain injury, particularly frontal lobe dysfunction.

Before my son’s diagnosis, it was assumed that he might have some mild form of autism. Ritalin, accompanied by another drug, Intuniv, saved him. He’s flourishing, playing with friends and excelling in school.

The writer is a speech pathologist.

L. Alan Sroufe is absolutely right in debunking the myth that a pill can solve all the problems of children who exhibit learning and behavior problems in school. Difficulties with focus and attention arise from the confluence of multiple internal and external factors. They do not stem from simple disorders of brain chemistry, and they do not respond to simple remedies in the long run.

People are complex, biopsychosocial beings, and every child has his own set of personal and family problems.

A patient once told me: “I could never sit still or concentrate in school, but I know there was nothing wrong with my brain. It was because of all the chaos and tension in my family. Can you expect a child to sit quietly at a desk and concentrate on her schoolwork when the building is on fire?”

Attention deficit disorder and attention deficit hyperactivity disorder are catch-all diagnoses within which there are wide individual variations in etiology. Children need to be helped with what is ailing them, not be simplistically given a pill and expected to become little angels in the classroom.

The writer is a clinical professor of psychiatry at the New York University College of Medicine.

As the parent of a child with pronounced attention deficit hyperactivity disorder, I am baffled by L. Alan Sroufe’s suggestion that medication does not provide long-term benefits to children with A.D.H.D. I am eternally grateful to the educator who suggested that I get my son tested for the disorder. On his first day on medication, he was calmer, better able to pay attention in school and better able to participate productively in our family.

Although it took many months to find the right mix of medications, he has been on medication for eight years. Now 16, he has been on the honor roll every semester of high school, has many friends and is respected by his teachers and peers. Most important, he feels in control of his behavior and comfortable with himself.

I sincerely believe that his medication, along with dedicated doctors, teachers and parents, has enabled him to get to this place in his life. While attention deficit disorder may be overdiagnosed and A.D.D. medication may occasionally be used as a crutch, I know that this medication has significantly improved the life of at least one child.

The article illustrates the nearly universal misconception that Ritalin should somehow, as if by magic, reduce behavior problems, improve academic performance and enhance social relations. Ritalin can do none of these things.

Many years ago, an 8-year-old boy returned to my office after starting a trial of Ritalin. I asked him if the medicine was helping. He said, “Yes, it helps me focus.” Then he gazed out the window for a moment, looked back at me with a sweet smile and added, “if I want to.”

Ritalin gives children with attention disorders the opportunity to learn the things their parents can teach them. But if the parent is not willing to instill high expectations, enforce rules, recognize effort and reward achievements large and small, then a mountain of Ritalin is not worth a hill of beans.

The writer is a psychologist specializing in behavioral pediatrics.