Youth with bipolar disorder misread facial expressions as hostile and show heightened neural reactions when they focus on emotional aspects of neutral faces, researchers at the National Institutes of Health's (NIH) National Institute of Mental Health (NIMH) have discovered. The study provides some of the first clues to the underlying workings of the episodes of mania and depression that disrupt friendships, school, and family life in up to one percent of children.Brain scans showed that the left amygdala, a fear hub, and related structures, activated more in youth with the disorder than in healthy youth when asked to rate the hostility of an emotionally neutral face, as opposed to a non-emotional feature, such as nose width. The more patients misinterpreted the faces as hostile, the more their amygdala flared. Such a face-processing deficit could help account for the poor social skills, aggression, and irritability that characterizes the disorder in children, suggest Drs. Ellen Leibenluft, Brendan Rich, Daniel Pine, NIMH Mood and Anxiety Disorders Program, and colleagues, who report on their findings May 29, 2006 in the Proceedings of the National Academy of Sciences."Since children seem to have a more severe form of the disorder, they may provide a clearer window into the underlying illness process than adult onset cases," explained Leibenluft. "Our results suggest that children with bipolar disorder see emotion where other people don't. Our results also suggest that bipolar disorder likely stems from impaired development of specific brain circuits, as is thought to occur in schizophrenia and other mental illnesses."Magnetic Resonance Imaging (MRI) studies have shown that, unlike in adults with the illness, the amygdala is consistently smaller in bipolar children than in healthy age-mates. Also, the NIMH researchers had found earlier that bipolar children falter at identifying facial emotion and have difficulty regulating their attention when frustrated.Using functional MRI, the researchers measured brain activity in 22 bipolar youth and 21 healthy subjects while they rated faces. In addition to the amygdala, other parts of the emotion-regulating circuit — nucleus accumbens, putamen, and left prefrontal cortex — were also hyperactive in patients, compared to healthy peers, during the emotional tasks. Patients rated themselves as more afraid, and they rated the faces as more hostile, compared to healthy peers. The groups did not differ on nose width ratings, confirming that the differences were specific to perceiving emotional processes."By finding a brain imaging trait that may be more selective than current clinical criteria, this line of research might help us refine our definition of pediatric bipolar disorder," said NIMH Director Thomas Insel, M.D. "The researchers are following-up with imaging studies of children with bipolar spectrum disorders and healthy children who are at genetic risk for developing the disorder to see if they also have the same amygdala over-activation."Also participating in the study were: Dr. Deborah Vinton, Dr. Rebecca Hommer, Dr. Stephen Fromm, Lisa Berghorst, NIMH; Dr. Roxann Roberson-Nay, Virginia Commonwealth University; Dr.Erin McClure, Georgia State University. 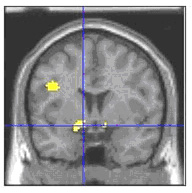 The left amygdala and related structures (yellow area where lines intersect) are part of an emotion-regulating brain circuit where children with bipolar disorder showed greater activation than controls when rating their fear of neutral faces. Structural MRI image with functional MRI data superimposed.