Researchers say suicide risk is highest soon after such an incident 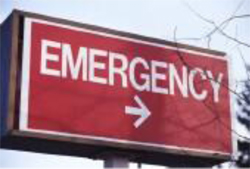 FRIDAY, Feb. 10 (HealthDay News) -- Most children and teens who deliberately injure themselves are discharged from emergency rooms without an evaluation of their mental health, a new study shows.

The findings are worrisome since risk for suicide is greatest right after an episode of deliberate self-harm, according to researchers at Nationwide Children's Hospital in Columbus, Ohio.

The researchers also found the majority of these kids do not receive any follow-up care with a mental health professional up to one month after their ER visit.

"Emergency department personnel can play a unique role in suicide prevention by assessing the mental health of patients after deliberate self-harm and providing potentially lifesaving referrals for outpatient mental health care," said lead study author Jeff Bridge, principal investigator at the hospital's Center for Innovation in Pediatric Practice, in a news release. "However, the coordination between emergency services for patients who deliberately harm themselves and linkage with outpatient mental health treatment is often inadequate."

For the study in the Journal of the American Academy of Child & Adolescent Psychiatry, researchers examined Medicaid data for adolescents aged 10 to 19 years. Only 39 percent of the patients discharged after trying to harm themselves received a mental health assessment in the emergency department.

Up to 90 percent of young people who deliberately harm themselves meet criteria for at least one psychiatric disorder, particularly mood disorders, the researchers said.

The U.K.'s National Institute for Health and Clinical Excellence recommends that people who show up in an emergency room for self-harm should receive a mental health evaluation before being released from the hospital.

The American Academy of Child & Adolescent Psychiatry has more about self-injury among teens.